At times like this I almost regret leaving Biased-BBC because our “Is” readership is comparatively limited, and our contributions come and go more or less unremarked. We don’t promote ourselves or spam other blogs with links and ads. Maybe we should, but we don’t.
We don’t orchestrate festivals or raise money for massive publicity stunts either.

Speaking for myself, the obscurity of “Is” doesn’t bother me, until something like Bethlehem Unwrapped comes along. 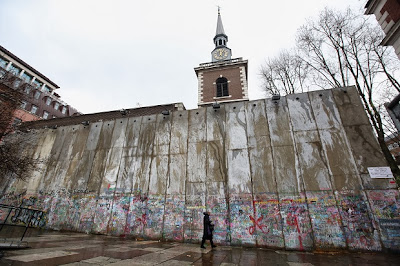 As many people as possible should be made aware of what was wrong with it.
I detect that Lucy Winkett herself is even beginning to have doubts. She has written a defensive op ed in the Guardian, which seems to be one of those damage limitation efforts, without openly admitting that there has been any damage.
She claims that they were supporting “beautiful resistance”, which reinforces the concept that the ‘resistance’ is a noble thing. But is it?

“and in the church courtyard our stewards have listened to all viewpoints without exception.”

Lucy’s primary case for the defence is that this project is even-handed and not about taking sides. She gives examples of some of  the messages, singling out a poem entitled “Every Wall Has two Sides” and continues: “Several have written “this wall saves lives” Anything offensive on the wall has been removed immediately”
Several? I’d be interested to know exactly how many people, other that the original author, have managed to write that, and whether the invigilators intervened while that particular slogan was altered, twice, by anti-Israel scribblers in the way I mentioned in an earlier post. Perhaps she was exaggerating to bolster her argument.

“We are supporting the ordinary people of Bethlehem at Christmas because we believe it would be wrong to sing about the town and meditate on its importance to our faith without acknowledging the grievous situation its citizens find themselves in today.”

Statistics say that the ordinary people of Bethlehem are predominantly Muslims, and that they are intimidating the dwindling Christian population. Why would the church particularly support that?

“Of course we have attracted some criticism for doing this, and so, on behalf of the church, I would like briefly to address this head on. Some have said that by hosting this event, we are somehow refuting Israel's status as a state; some have even claimed that we are aligning ourselves with those who support the Holocaust, suicide bombings or that we are antisemitic. These accusations and the ease with which they are employed are totally irresponsible and inflammatory. We are acutely aware that antisemitism is real and pernicious and we stand strongly against all forms of racism including antisemitism.”

Lucy, you have said precisely nothing. You have aligned yourself with holocaust supporting organisations, no doubt inadvertently. But you haven’t engaged with that specific accusation head on, merely denied it. Okay, you’re not an antisemite. Not deliberately, just ‘accidentally on purpose’, which is what we used to say when we were kids but you don’t seem to hear it so much these days. Quite a useful phrase it is too.

We support the state of Israel's right not only to exist but to flourish as a member of the international community within secure, internationally recognised borders.

In what way? So how does your support manifest itself? By opposing the security barrier?
Secondly, says Lucy, we have been challenged that we haven’t acknowledged: “The government position” that the wall was built for security reasons.”
The government’s position? That’s exactly like saying “Israel says”, just like the BBC always does, i.e., paying lip service to Israel’s case, while impliedly casting doubt on both the sincerity and the validity of it.
She states that this has been well articulated by the church, and:

“It is also projected on to the wall installation along with an acknowledgment that the barrier has been declared illegal under international law.”

So, another argument for the not taking sides defence obliterated with a neatly timed own goal.  She’s boasting that they made sure anything that might look pro-Israel was counteracted before the anti-Israel brigade had the time to be offended.

She also refers to events with speakers, omitting to mention that the list is predominated by known anti-Israel activists. Where’s the ‘disproportionate’ argument when you really need it?

Douglas Murray has written about this.

I’m in good company. He makes many of the points I’ve tried to make, with added value, personal testimony and eloquent prose. "Moral squalor."

I was surprised that the Guardian article drew a mixed bag of comments, rather than the usual Israel-bashing ones. There seemed to be an unusual number (for the Guardian) of comments critical of Lucy Winkett and critical of Bethlehem Unwrapped. So yippee. One thing that came up in several comments was the lack of ‘below the line’ engagement by the author. Given Douglas Murray’s eminence as a speaker and writer, even more telling is the ending of his article “I have been trying to get hold of Lucy Winkett, the Rector of St James’. But she does not appear to be available.”
Well, she usually makes herself available to the BBC, as do Jeremy Hardy and the other one.
Oddly enough, the BBC hasn’t reported this event at all. At least the BBC website search engine brings up ‘sorry there are no results for your search”.

Maybe it’ll be the subject of “the Big Questions” I think there’s one tomorrow.