I like a bit of scathing anti-orthodoxy satire as much as the next man, so it was perplexing to feel nothing but dissatisfaction after seeing Charlie Brooker whose ‘acerbic’ take on TV and stuff should have made his weekly-wipe programme a joy. 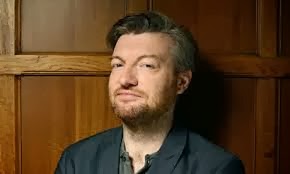 Charlie, me old friend me old beauty, are you sure you’re cocking your snook in the right direction? Or rather why cock your considerable snook at the right, when, if you’re as smart as we know you are, the orthodoxy you should be attacking is the left, the orthodoxy that really does prevail in your world.

By all means expose trivial low-hanging filmmakers’ deceptions, like those obviously pretend ‘spontaneous first-time meetings and greetings’ and ‘where on earth are the cameras?’ not to mention steaming microwaved tampons, but please don’t segue into another of those pro-immigration propagandas dressed up as an audacious piece of anti-orthodox Charlie Brooker insight.

Your scathing voice-over narration during assorted clips of impoverished Romanians and Bulgarians dragging comedy sacks around and riding along in rickety horse-drawn carts implied that airing such film equals deliberate manipulation by the media in a concerted conspiracy to falsify reality and scaremonger us all into a cowering mass of gibbering feartypantses, afraid of  imaginary bogeymen.

However, there’s one problem.  It’s your reality that is false.   The falsifying is all yours. All your lampooning of alleged TV-engendered scaremongering was aimed at ridiculing those of us who are worried about yet more destabilising immigration. What you should be ridiculing is the massive drive by the authoritarian status quo, i.e. the lefty media, which is deliberately designed to manipulate us; to assure us that immigration is a good thing, and furthermore, to 'expose' anyone who disagrees as a racist bigot!

Charlie, you might think you’re using your acerbic brain to mock authority. But you aint. In this case, you ARE authority. You’re mocking me and I don’t think it’s big or clever.

The problem is that with your conspiratorial relationship with the camera (and therefore with the audience) people will want to be on your side - who would want to be mocked - and that is where all the perplexing comes from. We want you to like 'us' and mock 'others'; not the other way round, please.

I won’t go into the issue of Doug Stanhope. His charmless mockery is what it says on the tin. Charmless and mockery. I won’t go into your clumsy unamusing backing acts either. Your programme needs pruning.