Busy with the fizzy

As this is a blog (primarily) about the BBC, I’d better stick to the way the BBC has been reporting the Scarlett Johansson business. Naturally I think she’s fantastic. A celebrity role model who is sticking to a principle, and a good one. But the way the BBC is reporting it is odd. In some ways it’s balanced because for once they have aired the Israeli argument, but  - as if they were afraid of being criticised for doing so - they’ve sought out the opposition in an almost gratuitous way. I would argue that it’s gratuitous because that particular position has been adequately covered by the BBC multiple times, with no little or counter argument. 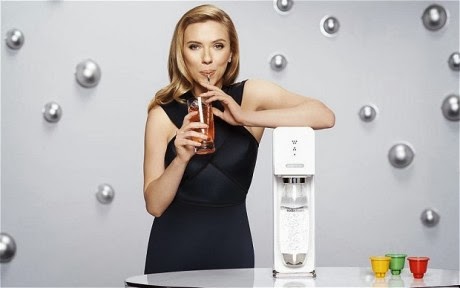 Brendan O’Neill has said it in the Telegraph.
He deals with this particular case, and the broader issue of the BDS movement, which is exposing its own hypocrisy more and more with each passing “From the River to the Sea.’
Even its arch proponent Finkelstein has described it a cult. Although I don’t know if all the protesters that stand outside Sodastream outlets with placards would openly admit it, their aim is the elimination of Israel  as  Jewish state and the creation of yet another Islamic one by default.
“you make up numbers, fantasize and all of the followers are supposed to nod their heads.”

The fact that charities like Oxfam have become politicised is gradually seeping into public consciousness, and this is reflected in the comments below Brendan O’Neill’s article. An increasing  number of people are expressing independent thought and many have decided to do a bit of low-level boycotting of their own - by not donating to Oxfam.

Even the BBC this morning on the Today programme had Kevin Connolly giving an uncharacteristically even-handed report, in contrast to various web articles that are to be found by searching “Sodastream”.
“Scarlett Johansson should know better.” What a strange title for that clip. I didn’t think that was the gist of the piece at all. It did feature a ridiculous quote from Amena Saleem, an activist of the Palestine Solidarity Campaign in the UK, who the BBC News sought out to speak to and devote a whole page to elsewhere on the web. Her comments sounded even more idiotic, unjustified and illogical in this context than normal.

As usual, BBCWatch provides the background that the BBC can’t face.

However, for once the BBC has attempted to give the other side of the story, which does make Amena Saleem and co-cultists look ridiculous, racist and purely vindictive. I bet the BBC will come in for as much flak for airing that as Scarlett herself has had to, for refusing to cave in to Oxfam. Will the BBC be as  steadfast?