King Lear, his Daughters and the "non-violent" Islamist 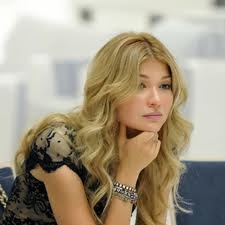 Another interesting Radio 4 documentary on Thursday was Crossing Continents, which reported on the rise and (apparent) fall of Gulnara Karimova - the powerful, glamorous, pop-singer daughter of ruthless Uzbek strongman Islam Karimov.

BBC reporter Natalia Antelava had a personal angle on the story, having been long engaged in a Twitter 'discussion' with Gulnara. Having subsequently decided to visit Uzkekistan, Natalia was surprise to cause a considerable stir at Tashkent airport when staff there recognised her name and realised who she was. She was sent packing.

The programme made play with King Lear-derived imagery, with Karimov as King Lear and Gulnara and her younger sister Lola cast as Regan and Goneril. A bitter family feud appears to be unfolding, and Gulnara is losing out. Why? Has Karimov had enough of the scandals that follow Gulnara around? Is it part of some cunning manoeuvering by the country's powerful secret police chief?

Someone should write an opera about this.

The Uzbek government has an appalling human rights report and it appears as if one of its agents attempted to assassinate an opposition imam who had been granted asylum in Sweden:

A well-known Uzbek imam Obid-kori Nazarov lived in a small apartment on the third floor. In Uzbekistan Nazarov preached non-violent, apolitical Islam but he openly criticised President Karimov and his family, and had a huge following. The government said he was a dangerous radical and thousands of his followers are in jail in Uzbekistan.

The Uzbek government doesn't, as far as I can see, call him a "dangerous radical" at all. It actually calls him a "terrorist", and accuses him of being the inspiration behind several deadly terrorist attacks within Uzbekistan (of which there have been several, including attacks on the US and Israeli embassies there).

It's hard to judge who's correct here. Is it the highly-motivated and ruthless Uzbek government, who are quite capable of smearing a "non-violent, apolitical" opposition imam as a "terrorist" mastermind? Or is it the BBC and Nazarov's supporters, who say he's a "non-violent" figure?

An interesting article on the surprisingly large Uzbek Muslim refugee population in Sweden from the anti-Karimov Uznews.net website (and, therefore, not a pro-regime state site) doesn't provide a clear answer either, but it casts a revealing light on what kind of beliefs Nasarov holds and informs us that:

In addition to disciples from Uzbekistan, his admirers include Chechens, Dungans, Uighurs, Afghans and others, who have highly appreciated the Uzbek imam’s knowledge.

It comes to something, whatever the case, that you should feel the need to check out any statement by a BBC reporter which casts an Islamist in a favourable light. I'm afraid I don't trust them anymore over such things.
Posted by Craig at 11:20