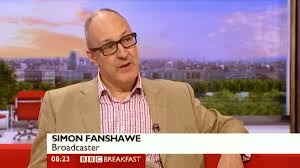 The first weekend BBC Breakfast paper review of the year featured the man who is evidently the programme's most regular paper reviewer, Simon Fanshawe.

Simon is a writer, broadcaster and Labour Party supporter. He holds strong views and doesn't hold back from expressing them.

In the first paper review he began by gloating over Nick Griffin's bankruptcy, denounced the 'Daily Express' as "scandalous" for its reporting of the Romania-Bulgaria immigration story, attacked politicians for jumping on the anti-immigration bandwagon, extolled the economic benefits of immigration, and then berated tax avoidance by internet companies.

In the second paper review he worried about rising house prices, attacked the government's 'Right To Buy' scheme, mocked the 'Daily Mail' for its anti-BBC stance, 'hurrahed' for the idea of more public spending on doctors,  slated the government over their NHS reorganisation, got on his high horse about private education, praised state schools, and ended with a passionate sneer at the comments of a private school headmistress.

Neither of the BBC presenters sought to play devil's advocate with him during any of this, merely clucking sympathetically at him from time to time.

As I've said before, where is the equivalent voice from the political Right? Why is the programme so reluctant to invite right-wingers on to review the papers? And why does this problem seem to be getting worse?

Away from this evident bias and onto another...

Bizarre it may be, but that's a classic example of something I was reading about a week or so ago - Normalcy Bias.

That's the phenomenon whereby many people become abnormally calm and pretend everything is normal when disaster strikes.

It effects most people in a life-threatening crisis, apparently. Those who panic by either (a) going to pieces or (b) leaping into action to save themselves appear to be in the minority (despite what you  see in films).

Plus, normalcy bias can strike whether people are immediately confronted with the life-threatening situation or even if they've been warned about it weeks before - hence those people who just sit tight and carry on regardless even when they've been warned that a severe tornado is about to hit their town.

Strange, and often fatal behaviour.
Posted by Craig at 13:41