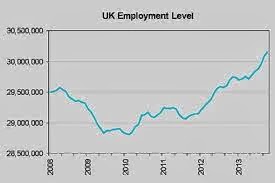 Following on from the completely-and-utterly one-sided pro-drug (khat) piece on Wednesday's night's Newsnight, what can we say about the rest of that edition?

Well, it contained three other topics: (a) the latest unemployment figures, (b) Syria and (c) sex pests (in the light of the Lord Rennard story). Let's look at the first of those.

The bias in the khat piece can be excused (at a push) by saying that it was a non-BBC 'personal view'. The 'latest unemployment figures' report, in contrast, was an entirely inhouse report. It came from the BBCs Andy Verity.

It's framing imagery - 'Working Street' - mocked the Left's bogey-programme-of-the-moment, Channel 4's much-talked-about, ratings-grabbing (7 million!) documentary Benefits Street. [People at work really are talking about it. No one is talking about Newsnight.]

On the day that the Office for National Statistics (see a few posts ago) released its latest stats for employment and unemployment in the UK showing a large rise in total employment (now at a record level), a sharp fall in unemployment, a fall in the number of economically inactive people and a rise in total pay and regular pay, Newsnight chose to report from another street in Birmingham - one where people work rather than being just on benefits. Strikingly, this was presented as being more representative of Britain now - "not too far from the average street," as Andy put it.

He talked to two such residents - one who complained about being on zero hours contracts and the other who, whilst in work (self-employed), was "classed as being in poverty". Neither, as you can see from the stats in the post slightly lower down the page, are at all 'average' or 'representative'. Both are outliers, statistically-speaking. Why then were they presented as Mr Averages, typifying the present condition of Britain?

Well, this all seemed pretty biased stuff, rather bearing out the complaints of many at, say, Biased BBC that the BBC seems to be accentuating the negative, as usual, about the economy under the coalition.

Then came what might be seen as the the clincher.


Update 25/1: That said, Andy Verity was back on last night's Newsnight as the programme plugged previewed a Labour speech intending to reassure voters that Labour will be a safe pair of hands on the economy, and he didn't underplay the problems Labour face with the public over their economic reputation. There were images of cars and dummies depicting the crash that happened on Labour's watch [which they can't have enjoyed watching!] and memories of pledges of economic competence past which smashed into the ground. Victoria Derbyshire's introduction laid out the agenda:


Tonight Labour promise to wipe out the budget deficit by 2020 if they win the next election and to bring in legislation to make sure they actually do it. But can he {Ed Miliband} persuade the voters to forget it's Labour who presided over the financial crisis which created much of the deficit mess. Right and Left are here to point the finger at each other.