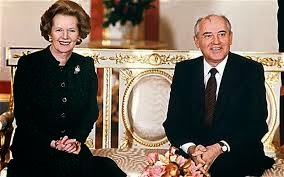 Sticking with Radio 4's UK Confidential and those fascinating 1984 National Archive releases, the programme featured extracts from the exchanges between Mrs Thatcher and Mikhail Gorbachev at their famous first meeting in December of that year - and very interesting they were too.

What we didn't hear on Martha Kearney's programme was some of the added detail contained in the reports of the meeting.

For that you have to listen to archivist Simon Demissie on the podcast from the National Archive.

Here are a couple of examples:

At one point Thatcher does question him on the point of Soviet funding of the striking miners. Gorbachev denies any knowledge. He says, "We do not fund the striking miners," and he turns to his side and notices an official catching his eye and then quickly says, "...as far as I know."

There's one very interesting story, when Gorbachev was in Whitehall visiting the Houses of Parliament and as his motorcade was driving past, he thought he would drop in at Number 10. And he was allowed - him and his entourage - to get to the door but, unfortunately, the Prime Minister wasn't there. I believe that's when she was visiting Hong Kong. So this rather extraordinary situation of Gorbachev turning up and no one being there to receive him had occurred. Now the note in the file notes that "fortunately there were no photographers present".

Both the BBC's UK Confidential and the National Archive broadcast also discussed a fairy story/allegory written by John Redwood. The story, 'Tilting at Castles', begins "Once upon a time" and tells of the knights of the Stock Exchange.

Archivist Mark Dunton (on the National Archive podcast) pointed out that Mr Redwood was Head of Mrs Thatcher's Policy Unit at the time, adding that "his voice is everywhere to be found in these files." In his memos he was generally urging the government to be bolder, more radical and make deeper cuts in public spending. Mark described him as acting as an "outrider", "saying the sort of things that the Prime Minister would have a lot of sympathy with but could not necessarily perhaps say herself", and as "a man with a certain amount of influence." 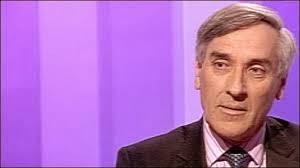 He's actually making a serious political point in a way because he's really saying that these knights, these privileged knights in this Stock Exchange, they're enjoying the fruits of their labours but he's implying that it's a very, very closed, tight, exclusive sort of group, and outside the Stock Exchange castle, he says, lives a great population of subject peoples and peasants and they are rather restricted in what they can do with their savings and with their investments. And what's implied here is that he's really arguing for the opening up of the Stock Exchange to make it more accessible so that other people can have a stake basically. And that's really the point of the story...

...And, of course, the actual deregulation of the Stock Exchange didn't actually happen until three years later with the Big Bang when the exclusive firms in the City were...Outside companies could actually make investments in the City and provide services whereas before the services would all be really tightly controlled. So some of the changes did happen three years later and you could argue it shows John Redwood with an eye to future reform. But it's certainly a rare find from the files.

Very interesting. I hadn't expected John Redwood's influence to be quite so strong and, maybe, that Jackanory story of his helped build the impetus for that ground-breaking reform of the UK's financial system.

Sadly very little of that kind of analysis found its way into Martha Kearney's take on the story, which avoided the point and substance of Mr Redwood's morality tale and went for mockery instead. It was all about laughing at John Redwood as far as the BBC's UK Confidential was concerned. (Lord Kinnock even got to insult him).

Maybe the National Archive should take over Radio 4 and up the quality of the reporting!
Posted by Craig at 13:10