"a Tory minister who fell from grace" 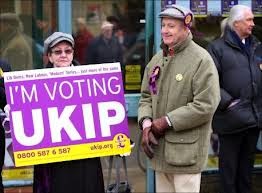 Moving back in time to the Tuesday 21st January edition of Newsnight, let's turn to the programme's remarkable savaging of UKIP for some of its member's distinctly un-PC comments.

Kirsty Wark's introduction to this feature dripped drooled with unfriendly sarcasm and Emily Maitlis's subsequent report did that thing of showing Emily sitting pretty in some unfamiliar part of the Newsnight studio speaking on the telephone to some poor chap from UKIP who'd committed the unforgivable sin of tweeting something that wasn't to Newsnight's taste - a jokey tweet calling Barack Obama "Islam Obama" (which, if Newsnight types believed in the death penalty, would surely be considered a hanging offence).

The savaging only got worse when Kirsty gave a UKIP representative in the studio the full stony-faced, interruption-heavy, curt introduction-and-closing-thank-you, relentless attack kind of interview that Kirsty tends to reserve for those she feels absolutely no sympathy for.

That UKIP representative was the famous Neil Hamilton (of Neil and Christine Hamilton fame).

When complaining that Newsnight had failed to inform its viewers about Alain Soral's far-Right and antisemitic track record, the BBC Complaints department argued (you may recall) that the programme couldn't tell its viewers everything after they chose merely to described him as a "French writer and film-producer"...

...and yet, Kirsty Wark didn't just introduce Neil Hamilton as UKIP's deputy leader. Oh no. She introduced him as:

Was that strictly necessary, except in the context of a hatchet job on UKIP? Well, it certainly set the tone for what followed.

It's funny how Newsnight can provide background on an interviewee during their introductions to an interview...when its suits them.
Posted by Craig at 23:58