Casting the Hammer aside 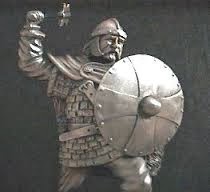 I have to say that I agree with chrish about this week's In Our Time.

I love In Our Time (and think Melvyn Bragg is an excellent presenter of the programme), but chrish is right to describe its account of the Battle of Tours as being a "slyly-biased" one, and his concern is exactly the same as mine:


"that the BBC will only have one side of the debate aired."

I'd read up on the Battle of Tours in the days leading up to the programme. Wikipedia was my source. (You may say 'tut tut' to that, but that's the source the In Our Time website also links to.)

Wikipedia's account makes it very clear that there is a lot of disagreement about the nature and the significance of the battle - and that the debate is far from one-sided, with large numbers of eminent living historians lining up on either side. The three guests on this edition of In Our Time, however, all came from one side of that debate.

Essentially, Side A believes that the Battle of Tours (c732 AD) was a key turning point in history when the Frankish forces of Charles Martel stopped the tide of Muslim aggression that had swept across much of the Near East and Northern Africa in the hundred years since the death of Mohammed, crossing into Europe in 711 AD via Spain and moving ever upwards. Without Charles's victory (and his run of follow-up victories), the Muslim armies would have kept trying and France may have fallen the way of Spain, and then the rest of Europe. Without the Battle of Tours, we Europeans could have been under Muslim rule for the last 1,300 years listening to Mohammed al-Bragg on In Our Time and Abu Stourton on Friday.

Side B believes the Battle of Tours isn't important, that the Muslim tide had already reached its natural limit by that stage and that all that the Muslim forces were up to in southern France was merely raiding for booty. They weren't coming to conquer.

The three guests on In Our Time were all drawn from Side B. From the programme, listeners might have assumed that they represented modern scholarship's settled take on the significance of the Battle of Tours, set against the misguided historians of bygone, benighted ages. Nothing could be further from the truth.

I can do no better than quote chrish's take on the course of the discussion:

Islam was energetic as it converted Berber....it only wanted to get more booty for itself so there was no religious imperative at all. The Franks were no better-they would have been as foreign and as mercenary as the Muslims..but with worse algebra and a lack of Greek translations, Islam being such a vector of nice things.

Bede was trashed, Gibbon scorned-why this Battle wasn`t really much at all!

Only on a couple of occasions did a chink of the other reality come through - when Melvyn Bragg bridled (in a good humoured way) at his guests' airy dismissal of Bede and when historian Hugh Kennedy felt he had to add an 'up to a point' comment (but no more than that) to Melvyn's misty-eyed listing of all the harmonious wonders of benign Muslim rule in Spain.

Of course, it was still - as In Our Time nearly always is - an interesting discussion and a fascinating topic. If only it had been more of a debate, and more representative of the present debate about the battle.
Posted by Craig at 07:52

Labels: 'In Our Time'