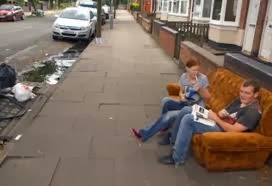 
Make a documentary about poverty in Uganda and you could win an award. Look at problems in Britain and you’re reported for thought crime — sometimes successfully: BBC One ran an excellent documentary two years ago in which John Humphrys returned to the neighbourhood outside Cardiff in which he grew up and found a quarter of its residents on benefits. How had this “age of entitlement” come about, he asked? The BBC Trust was barraged into finding him guilty of presenting “a personal view on a controversial subject”. Ever since, BBC journalists have shied away from exposing the nature of British poverty — perhaps why they have given such ample coverage to the furious reaction to Benefits Street.

The BBC certainly has given "ample coverage to the furious reaction to Benefits Street", from dawn (Today) to dusk (Newsnight) you might say. Even yesterday's More or Less covered it (dismissively).

Channel 4's documentaries have often gone where BBC documentaries daren't go - think Undercover Mosque for example - and Dispatches (of which Undercover Mosque was a part) has regularly outstripped the BBC's Panorama, as well as being more 'panoramic' than Panorama in the range of subjects they cover (can you imagine the BBC daring to enrage the teaching unions, as Channel 4 did, with Undercover Teacher?....

....and in the range of opinions they give voice to. The presenters of Dispatches - most drawn from beyond the circle of Channel 4 News - don't have to pretend to be impartial journalists uncovering the truth without having an underlying political agenda. You may not always like the result, but it feels a lot more honest than the BBC alternative.
Posted by Craig at 07:03