As it's Sunday night, there are various loose threads that I've left dangling in my head over the past few days and I don't want any passing cats to start playing with them and make a mess on the carpet. Much better to make that mess on a blog.

Melvyn Bragg's In Our Time this week looked at the sources modern academics use to study early Chinese history. This was In Our Time at its best. I can't say I was exactly drooling at the subject matter beforehand but I found it absolutely fascinating. It helped having three engaging academics to talk about it, especially Roel Sterckx of Cambridge University. (My goodness, that man is fluent and interesting. Less Linda Colley, more Roel Sterckx please BBC.)

If you were wondering (and knowing you, of course you were!) the earliest Chinese written records of historiographical value are the 'oracle bone inscriptions' of the Shang dynasty (c1600-1700 B.C.- c1050 B.C.). They date from around 1200 B.C. They are inscriptions written on the shoulder blades of oxen and turtle shells, divination records of the Shang king's consultations with his royal ancestors. On the bones a question was put (such as "Will the king become ill this month?"). A priest then cracked the bone with a hot poker and wrote down the prognostication from the cracks in the bones, seen as the answer from the ancestors. There about about 200,000 fragments of these bones around the world, some 400 in Cambridge University Library alone. They allow academics to work out the movements of the Shang royal family, and mention such things as childbirth and toothache. 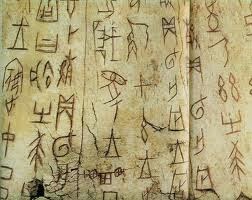 Now a brickbat, and I'm lobbing it straight at Jeremy Paxman.

What is it with the likes of Jeremy Paxman and John Humphrys that they only ever seem to have one tone when interviewing a scientist about some matter of general scientific interest - a tone of sustained (if good-natured) bemused scepticism tinged with moments of 'gee whiz!' surprise? It's always the same question too: 'What's the point of this?', with 'Why are we wasting our money on this?' often chucked in as a bonus question. Last Monday's Newsnight saw The Great Paxo interviewing The Sky at Night's excellent Professor Chris Lintott about the comet-chasing Rosetta probe and those are the questions he put and that's the tone he struck. As to the 'waste of money' question, Chris replied:

Well, you have to think where the money's gone. The money doesn't go to the comet. The money's spent here on earth. It goes to people, it goes to technology and it goes to industries in this country and throughout Europe.

And while I'm chucking brickbats at the BBC's science coverage, I've got to say that the larkiness of programmes like Radio 4's Inside Science can be really wearing. Larky, larky, larky. If the larkiness led to laughs it would be OK, but it's almost always a laugh-free kind of larkiness. Yes, Humour and the Higgs-boson can certainly go together, but they certainly didn't during the exchanges on this week's edition. Come on, Inside Science, treat us like adults please, or do I have to send Melvyn Bragg in to sort you out? I will, you know. I will send in Melvyn Bragg to sort you out.

There were no laughs whatsoever during this week's Four Thought. The previews of Four Thought rarely tempt me to listen, but this week's edition sounded interesting - and most unlike the sort of thing you usually hear on Radio 4. It was a talk by a former British soldier who served in Afghanistan, and made for a genuinely thought-provoking listen.

Emile Simpson gave an account of how the strategy in Afghanistan evolved over time to become ever more subtle and sophisticated. Concrete examples were given as to how British strategy changed as the early idealistic aims of the war ran into the messy reality of Afghanistan and how growing local knowledge led to nuance and greater success in Britain's military activities. I don't think I've really done full justice to the shrewdness of Emile Simpson's arguments there, so please listen for yourselves. 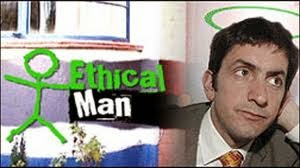 Time for another brickbat. (This is like a game of bouquet-brickbat table tennis).

Newsnight's Ethical Man, Justin Rowlatt, was back on the programme this week discussing the tax dodges of China's elite. It was just what I'd have expected from him and Newsnight. It was based on a Guardian report and the work of a left-leaning American investigative journalists' group, and featured the leftist Tax Justice Network's Richard Murphy (described, as ever, merely as a "tax expert"). It inevitably framed the Western banks and accountancy companies and ended with Justin saying, "And let's not forget who's ultimately responsible for that".

Can you guess who? "Ultimately we should say perhaps we're responsible and we should be looking to clean up this offshore haven", said Justin.

Yes, elements in China's elite are engaging in tax avoidance but the Chinese aren't the guilty ones, oh no. Yes, we are "ultimately" the guilty party. It says so on Richard Murphy's oracle bone inscriptions.

Now, if ever I heard the authentic voice of the Guardianista-BBC Left, that's it, in full flow. Thanks again, Newsnight. 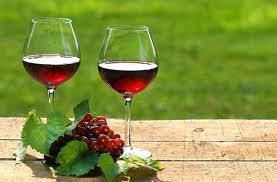 We're due another bouquet, I think, after that rant and I'm returning to More or Less.

A reader had seen an NHS poster at his local surgery which warned, scarily, that 'Two or more large glasses of wine a day could make you three times more likely to get mouth cancer.' Is that true? Well, More or Less investigated and, to cut a long story short, no, it isn't, and it's wrong in so many ways. Mouth cancer isn't common and, by itself, the stats actually reveal that the increased risk of mouth cancer from drinking two large glasses of wine a day actually carries a 0% risk. The increased risk from tobacco, however, is 22% - and here's where it gets interesting because the increased risk for people who use tobacco and alcohol is 61%. It seems to be the combination of the risk from tobacco and alcohol where the heart of the risk really lies. Please excuse me then while I pour a third large glass of wine then. Hmm, very nice.

Finally, as someone who used to write a classical music blog, I was very interested in Who Killed Classical Music? on Radio 4 the other day. It was written and presented by a young composer named Gabriel Prokofiev. Yes, Prokofiev. He's the grandson of the great Sergei himself.

Though pleasantly nuanced, it's general thesis was a familiar one to classical music lovers -  that the modernists and avant-gardists of the Twentieth Century (Schoenberg, Pierre Boulez, et al) had alienated Western audiences to a disastrous degree (unlike their traditionalist counterparts in the reactionary Soviet Union, such as that wonderful tunesmith Sergei Prokofiev). The post-war avant-garde in particular felt that the kind of tuneful, romantic classical music that led up to WWII was irredeemably contaminated by Nazism and that mass appeal was a dangerous thing. They denounced traditional, tonal composers and became an authoritarian, dominating presence looming over the classical music scene. Meanwhile, the hated bourgeois audience went back to their tuneful classics, ever shrinking in number as more and more people found that the only contemporary music they liked was popular music (or jazz.)


Now, as the programme made clear, the influence of the avant-garde has declined sharply in the last couple of decades, and tunes and audience appeal are very much back in vogue. Still, despite that - and despite Classic FM - audiences remains small and knowledge about classical music minimal. Gabriel felt hopeful things are beginning to improve though.

Here's where the BBC comes in.

If there's one thing reading classical music magazines for 25 years of so has taught me it's that lots and lots of British classical music fans of a traditional bend - those who like tunes and dislike too much dissonance - blame a particular institution above all for that avant-garde dominance of British contemporary music in the decades after the war (especially from the late 1950s onwards). That institution is the BBC. They regarded it as having been a deeply malign influence at that time.

As Gabriel was broadcasting on the BBC at the time, he presumably felt it was impolite to mention that fact.

The man who usually gets the blame is former Radio 3 controller Sir William Glock. He certainly did have a strong bias towards the avant-garde (among many other biases). Sir William went on to control the Proms and stamped his radical mark on that too. Rumours of a hit list of traditional, conservative contemporary composers - tunesmiths to a man - who Sir William banned in favour of anti-tonal, experimental modern music abound and seem to have some truth. Some defenders of William Glock say that Radio 3 was actually worse under his successors, Robert Ponsonby and Sir John Drummond.

I'm banging on about all this because you may be unfamiliar with it - and because it interests me (and it's me and Sue's blog!). It's a peculiar area of BBC history, where the BBC seems very clearly to have been strongly intent on guiding and shaping public taste in classical music and conditioning them to admire a particular type of contemporary classical music.

I'm sure some of you might draw analogies with how the present BBC seeks to guide and shape public opinion on other matters.
Posted by Craig at 20:32

Labels: 'Four Thought', 'In Our Time', 'Inside Science', 'More or Less', 'Newsnight', 'Who Killed Classical Music?'