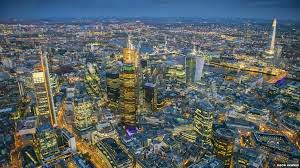 My goodness, isn't it surprising how much mileage a blogger about BBC bias can get from one single edition of a BBC programme if he (or, with due acknowledgement to Sue, she) really tries?

My third post on last night's Newsnight focuses on the third item on the programme's agenda - an item I was kind-of- prepared-for by a post by Alan at Biased BBC  - though Alan was a wee bit premature in thinking that the BBC had, in Orwellian fashion, 'vanished' it.

Newsnight's report was by Andy Verity, who seems (semi-officially) to have been promoted to Paul Mason's old position. It was based on a report by the think tank Centre for Cities, an offshoot of the centre-left (Labour-aligned) IPPR set up (as Louise Stewart might put it, on a good day) by Labour's Lord Sainsbury - none of which background information was mentioned by either Newsnight or the BBC News website. Newsnight merely described Centre for Cities as a "research group".

London is, the report says (according to Newsnight), doing much better than other cities - and Andy was quick off the mark in drawing the present government into the blame for presiding over this disparity (we're talking mere seconds into his report.)

We heard from Alexandra Jones of Centre for Cities (formerly of the IPPR), who pushed that same line, and Andy then stated (quite emphatically) that Vince Cable had it right in advancing the same argument.

Now, I was starting to fume about bias by this stage (understandably?) but the next 'talking head' was Boris's friend Kit Malthouse (Deputy Mayor of London for Business), who dismissed the line of argument that London is a huge problem (as you'd expect from a Deputy Mayor of London). That's obviously a measure of balance.

Still, Andy then immediately countered him (narrator's prerogative) - and ended his report by saying that it was hard to see how London's stranglehold over the British economy could be overcome.

A studio discussion on the issue then followed, balanced between (mildly) Left, Labour's Graham Stringer MP, and (mildly) Right Sarah Sands of the London Evening Standard. Graham's Londonosceptic while Sarah is clearly a Londonophile.

This Centre for Cities report - which you can read here - looks interesting. It's the sort of report that needs time to digest, but an initial read-through doesn't present quite so stark (and negative) a picture as Newsnight. Many cities, according to the study, are also on the up. Newsnight only mentioned the downers (for which a 'tut, tut!' is in order).
Posted by Craig at 22:52