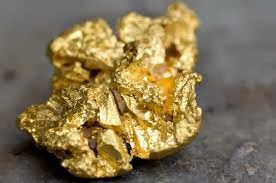 If you blog about bias it's surely inevitable that you'll end up throwing more brickbats than bouquets at the BBC; in fact, it tends to be pretty much brickbats all the way. Here, however, are a couple of bouquets for the BBC.

One goes to whoever decided to choose Gold: The Race for the World's Most Seductive Metal by Matthew Hart as last week's Radio 4 Book of the Week. Another goes to whoever abridged it (Peter Nichols, that's you!).

The first episode recounted the author's descent into South Africa's Mponeng mine, the deepest man-made hole on Earth (2.5 miles deep) - an intensely hot, vast, inverted metropolis where a crowded cage plunges hundreds of miners at a time a distance more than five Burj Khalifas in just four minutes to get them down just to the first level and where large numbers of illegal 'ghost miners' live, their skins turning grey, often up to months on end and sometimes with their wives or prostitutes, in the hope of nabbing some of that precious gold. And all for a seam of ore just 30 inches wide.

The second covered more familiar territory - the tale of how 300 Spaniards captured, conned and killed the Inca Atahualpa in the vicinity of his 200,000-strong army, all in the pursuit of gold - a very unpleasant tale, vividly told. Pizarro's gang got the gold but, in one of those rare occasions when history gratifies our sense of justice by giving its blackest villains their comeuppance, they didn't get to enjoy it, nearly every one of them coming to a nasty end of some kind. Ha, ha. The Peruvian army couldn't do anything to rescue their king because he was a divine being and unless he commanded them to do something - such as rescue him - they couldn't lift a finger. As Atahualpa was in no position to command them (being in captivity), 200,000 Inca soldiers had to stand by helplessly before helping to fill a large room with gold to placate the Spanish. It's a shame we couldn't bring Pizarro and the boys back to life and send them to North Korea. They'd know how to deal with Kim jong-un.

The third episode was the best of all, taking us to modern China and telling an almost completely unfamiliar tale. It told of the Chinese gold rush which began when Deng encouraged private prospecting in the early '80s and the Chinese government's subsequent flip-flopping between clamping down on it and giving it the tacit green light. That early gold rush was on a scale and intensity (a madness, you might say) that seems to eclipse even the famous 19th Century frenzies in the U.S.A. And it's still going on, resulting in severe environmental degradation, large-scale corruption and conflict with the locals - Tibetans, Uighurs and (inner) Mongolian nomads. China is mad on gold. It can't get enough of it. Literally. It imports more gold now than India (the previous top gold importer). Because of that there is now more gold being extracting in three months than in the entirety of previous human history. What happens when China reaches 'peak gold' (that point of no return when most of its own gold reserves begin drying up), perhaps as early as in six years time? The rest of the world's gold producers (legal and illegal) will be licking their lips in anticipation, and prices will rocket accordingly.

The fourth episode told of how President Nixon finally broke the link between gold and currency, engineering the end of the gold standard in 1971. It was as gripping as any of the other stories, and shows again just how remarkable and skillful a president that strange and crooked man could be.

The final episode brought us up to date - up to and beyond the financial crash of 2008 - and described the arcane process by which a few major banks set the international price of gold twice a day. It used to involve picking up and lowering small union jacks, and something of that tradition lingers on.

It will start disappearing from the i-Player soon, so if you want to listen, now's your chance. Or you could buy the book.
Posted by Craig at 06:55