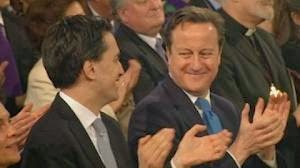 What should a media organisation which is bound by statute and its own editorial guidelines to report impartially do when a UK politician appears to be engaging in shameless electioneering? Should it say so?

David Cameron rejected suggestions today that he has decided to protect pensions ahead of offering immediate help to working people because the retired are more likely to vote. The Prime Minister used his first major interview of the new year to announce the Government’s pledge to commit to the “triple lock”, which guarantees that pensions rise by at least 2.5 per cent a year, because it was a “choice based on my values”. “I want people who reach retirement... to have a decent state pension and they don’t have to worry about it lagging behind prices or earnings,” he told the Andrew Marr Show on BBC One.

Who was accusing him of making this decision simply because the retired are more likely to vote? Labour? The Guardian? Whose suggestions is he rejecting?

Well, if you've been listening to Radio 4 today you'll know that it's the BBC which has been boldly suggesting this.

If there was a guidebook on how to be a successful politician, on Page One it would say, 'Appeal to people who are most likely to vote'. That is why wooing pensioners makes political sense. David Cameron's promise to renew his existing policy was, he said, the first plank on next year's Conservative election manifesto.

So, David Cameron insists he's doing it because it's right to do it. The BBC's Chris Mason, however, strongly implies he's merely doing it as an election gimmick.

Chris Mason may very well be right, but should he be saying so? Shouldn't he leave that to, say, Polly Toynbee in the Guardian or a guest on Broadcasting House?

Each news bulletin this morning followed that news item with another - a pledge from Ed Miliband to close a loophole in EU laws which he believes is used to exploit cheap foreign workers.

Ed's policy announcement was read out straight with no editorialising and no aspersions being cast on his motives or on the likelihood of him actually achieving what he's promising.

[Update: Over on BBC TV, another BBC political correspondent Carole Walker was up to the same thing, ending her report with the same suggestion:


Pensioners are the most likely age group to vote, so perhaps it's not surprising that the first plank of the Conservative manifesto is crafted to appeal to their interests.