Here are my first impressions about this morning's Sunday on Radio 4.

The first Sunday of 2014 began with an interview between Edward Stourton and the Archbishop of Sudan, Daniel Deng, discussing the descent into chaos of South Sudan - the world's newest nation - after just two and a half years of independence from the Muslim north. Archbishop Deng says it's not a tribal conflict, rather it's a political issue, a power struggle. (That's not quite what I've been reading). He wants the outside world to pressurise both sides.

The first Muslim-related story of the year came next. The website describes this feature thus:

As an Islamic charity unveils plans to open a new hostel for Muslim Women in Manchester Edward hears why it's needed and discusses the taboo subject of domestic violence within the Muslim community.

Edward talked to Iqbal Nasim of the charity National Zakat Foundation (NZF) and to Karima, a Muslim woman who spend some time in a London hostel run by the NZF. Both guests talked about how helpful such hostels were and how the specifically Muslim character of the hostel caters for their needs more than other such shelters. Despite the website blurb, there was very little discussion of "the taboo subject of domestic violence within the Muslim community", just one cautiously-worded question from Edward. Both Iqbal and Karima said the problem effects all communities.

Then came a fascinating report from the BBC's Dorian Jones. Sunday has a special interest in Turkey, if the sheer number of reports from that country is anything to go by, but this was one of the most unexpected. It told of how the restoration of an Armenian church "has become the focal point for ethnic Armenians seeking to rediscover their cultural identity and faith in Turkey's predominantly Kurdish southeast." The church is now awaiting a priest, currently being trained in Jerusalem. In the wake of the Armenian genocide, many child survivors of the mass pogroms were taken in and brought up as Muslims. Many remained unaware of their Armenian identity until very recently. Now some ethnic Armenians are converting to Christianity. One lady said that the Kurdish struggle for identity helped spur their search for identity. A schoolteacher said that, though there's now greater freedom to express their identity, Muslims still discriminate against them. She added that Kurds see them as not Kurdish while Armenians outside Turkey still see them as Kurds. The local Kurdish mayor who helped fund the restoration of the church emphasised its importance, rejecting Turkish Muslim mono-identity. He said Jews, Christians and Muslims used to live there. Another Kurdish man said the church will help them face up to the past, as many Kurds took a prominent part in the massacre of the Armenians.

"Should foreign aid be made conditional on a country's record on religious freedom and human rights?" That was the question put to former Conservative minister Liam Fox, who believes it should, and Kevin Watkins of the Overseas Development Institute, who believes it shouldn't. Actually, there was a lot of common ground between them. It was only that Kevin Watkins believes that withdrawing aid from governments that persecute Christians, women (he mentioned Malala), their Muslim minorities (both cited Pakistan in that respect) and gays (Kevin cited Africa) could hurt the people it's intended to help. The discussion was prompted by the persecution of Christians in the Middle East. Both guests agreed it's hard to do much (via aid budgets) about countries like Iraq and Syria, which are descending into anarchy.

The BBC's Bob Walker then reported on a campaign by a group of UK Sikhs "to have the events around the storming of the Golden Temple in Amritsar, India, recognised as genocide by the UN 30 years on." We heard from a variety of those campaigners, who allege that the Indian state was seeking to wipe out the Sikh population in the Punjab. Bob's commentary did give us a flavour of the Indian government's side of events, but his report was dominated by one side of the argument. However, after the report ended Edward Stourton said that the programme had approached the Indian High Commission to give its side. "Several times," he emphasised. They got no response. It's very unusual for Sunday to feature something of interest to the Sikh community though, so this is a step forward. 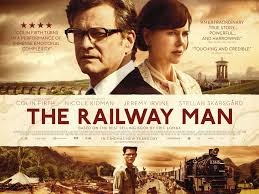 "As the film The Railway Man comes to UK cinema screens Louise Reynolds talks about the war-time experiences of her father, Bishop Eric Cordingly, as a Chaplain in the notorious Changi Prison during the 2nd World War." Bishop Cordingly's diaries and secret notes have now been published in a book, Down to Bedrock, brought out last October by his daughters. They relate to the horrific events surrounding the building of the Thai-Burma railway. The bishop felt no hatred towards the Japanese because of it though. Hate died in the prison camp for him, said Louise. His Christian faith directed him in that startling direction.

St James Church Piccadilly has erected a 26-foot-high wall to 'draw attention to Israel's anti-Palestinian policies'. But is it too political a gesture for the Church? Rev Lucy Winkett, Rector of St James's Church and Professor Alan Johnson, Senior Research Fellow at the British Israel Communications and Research Centre discuss.

Lucy struck much the same defensive position that Sue described yesterday, reiterating many of the same points she made in that Guardian article. Alan, as befits someone who agreed to take part in  a 'Bethlehem Unwrapped' debate, was generous to her (giving her the benefit of the doubt over her intentions) but remained critical of the event as a whole. He described it as a series of anti-Israel events, full of wild rhetoric, attended by lots of extremists. He said that the installation was misleading as 95% of the security barrier is a fence not a wall and that it doesn't surround Bethlehem. He says the event failed to bring out the point that it is necessary, given that a terrorist attempt to bomb a bus in Israel was made within the last couple of weeks, given that 900 people were killed in three years by terrorists before the fence went up and given that 90% of attacks have been thwarted by it. Unfortunately, as usual, the discussion came to an abrupt end.

Edward's question to each guest can be summarised as follows:

- (To LW) You must have known that you'd have been accused of a stunt by doing this?
- (To LW) That's all you were trying to do, support the people of Bethlehem - not make a broader political point?
- (To AJ) Do you accept that account?
- (To AJ) What did you make of the force of the "striking" visual impression of the installation?
- (To LW) I asked because its so striking it's bound to overwhelm the context, isn't it?
- (To LW) Whatever your intentions, a lot of people have taken it in a different spirit, haven't they?
- (To AJ) What do you think?

Such are my first impressions and sketchy notes. That final discussion in particular needs rehearing and unpacking further though.
Posted by Craig at 08:46