Immigration’ and ‘The Truth’ 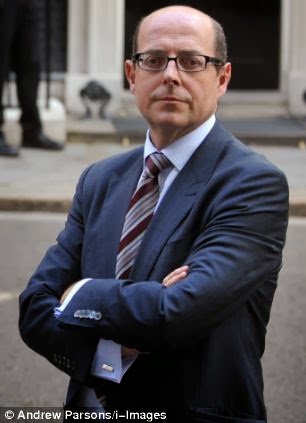 The BBC trailer gives us a quick impression of what we’re going to see.

He’s going to talk to some politicians, Labour and Conservative, and:

“untangle the truth about immigration from the political rhetoric.”

So you see, the BBC plays down Nick’s criticism of the corporation and their trailer concentrates on the demographics and the politics he’s about to highlight in his documentary.

“In Southampton, Nick visits a school where 42 languages are spoken – including two Zulu dialects. In Kent, he meets not just a handful of Bulgarian and Romanian footballers, but discovers an entire league of them”.

Oddly enough, the pieces I’ve been reading in the Telegraph, the D.M. and others, have concentrated on a different angle. They are going with:

“BBC accused of bias on immigration...by its own political editor. Nick Robinson says Corporation made ‘terrible mistakes’ by not reflecting public’s concerns.”

“Nick Robinson: BBC made a 'terrible mistake' over immigration debate”

It’s not surprising that the BBC didn’t take that particular angle, but the Telegraph and Daily Mail articles are extremely interested in Nick’s attack on the BBC for making a terrible mistake. More, even, than they seem to be about his findings about the demographic changes and the politics that engineered them.

He says the BBC did not reflect public opinion and they feared having a conversation about immigration - they feared the consequences - ”that it would unleash some terrible side of the British public.”

The Telegraph is typically restrained, but the Daily Mail is Daily Mailish and tabloidy and has gone for a robust approach. “stoke racism”

Mr Robinson said: ‘The same people who said you couldn’t have [British National Party leader] Nick Griffin on Question Time said: “Don’t talk about this. Do you know what you’re going to unleash? Do you know the horrors that are going to come?”
‘There was huge argument within the BBC about that.’

Anyway, Yasmin Alibhai Brown has weighed in with a cross-sounding piece in the Independent.  Her take on this is that the BBC has a duty to “moderate our national conversation”. That’s a weird concept. I assume she hopes they moderate it in a convenient manner and not some manner she doesn’t agree with. Perhaps she would like to be on the board deciding which way the BBC should manipulate their reporting? I suppose in a way she already is, and that, in a way, is what people are slowly waking up to.
Anyway, Yasmin wants Nick Robinson to look her in the eye and tell her it was a big mistake to let her people - the Ugandan Asians - into this country. I think she is confident that no-one, including Nick, would entertain the idea of doing any such a thing as that would entail depriving the country of her colossal charm and wit.
She accuses Robinson of “once” being an “ardent chairman of the Young Conservatives,” and adds: “If that feels like a slur, forgive me.”
Oh dear.

Let’s pause for one second. I’m an immigrant - third generation - so I wouldn’t like to align myself with the anti-immigration brigade. A trickle of new blood is fantastic. By all means encourage limited immigration as long as it doesn’t overwhelm the host society. People will assimilate if there’s a will. But my understanding of the issue is entirely different from Nick’s, Yasmin’s, the politicians’ and the BBC’s.

When the BBC issued a tacit moratorium on discussing immigration, real people were quietly beginning to worry about the BBC’s sanitising of Islam. They were obviously doing their utmost to ‘normalise’ it. People who found it unsettling would talk about it apologetically for fear of being thought (or actually being) racist. Somehow they got it into their heads that criticising Islam was racist, and they felt guilty for thinking racist thoughts.

Then we had Bigotgate, and Gordon Brown’s high-profile embarrassing moment in front of the cameras. It was a small blessing because people began to discuss immigration. But only in terms that couldn’t possibly be interpreted as racist. The BBC had to acknowledge the public’s dissatisfaction, but on certain terms only. It’s the ‘taking our jobs’ objection, the 'taking our benefits', our housing, our hospitals, our schools objection. You couldn’t be racist about Poles, could you?

No-one could openly admit that they were really concerned with the demographic elephant in the room, the ever increasing demands by Muslims and Muslim organisations, and the disturbing signs that Britain bends to the will of the Muslims. That would be racist. So instead we say “At last we can talk honestly about immigration” but of course we can’t.

Everyone, the government, the opposition, the BBC are all terrified of saying out loud that the sort of immigration we are afraid of is the sort that is itself unleashing some terrible side, not of the British, but of the third world, and the racism that is being stoked, which is is the racism of the Muslim against the non Muslim.

There you are, call me Enoch. Someone had to say it.

Further to this (and Craig’s updated) post below - Nick Robinson has been all over the place today, talking to his BBC colleagues. He was chatting with Humph on Today, and again on News 24, explaining, as Craig has noted, that: “We got it wrong before, but now we’re getting it about right.”

Poles, Europeans, so-called ‘white’ immigrants and the upcoming hoards from Romania and Bulgaria, i.e., the imminent mass invasion of people who might be more industrious than we are, who would be more draining on our resources, whose presence may or may not be of net economic benefit to the country, these are the concerns that are now being aired, openly, as part of the reformed transparent BBC. All in the name of liberty, freedom of speech and apple pie, with a smattering of scaremongering.

There’s still the question of a type of immigrant whose identity can only be whispered between consenting adults in a soundproofed room. Where’s the scaremongering about that threat when you need it? Oh yes; they do their own 'scaremongering'.

A bizarre item, brought to you by way of Newsnight.
An ongoing filmed report, designed to reassure anxious viewers that the forthcoming invasion of Romanians is nothing to worry about. Newsnight is going to follow some prospective Romanians who are about to invade the UK.
Contrary to rumours circulating within the underbelly of right wingers and Daily Mail readers, Romanians are not  pick-pocketing Romany-type beggars, blaggards and thieves, but charming professional ladies whose English accents are more cultured than your average Brit's. They plan to come over and work, shoot and leave.

Nick Robinson’s mea culpa looks just like a cloak, a veritable burka, thrown in a panic, over the real problem.
Posted by sue at 21:16