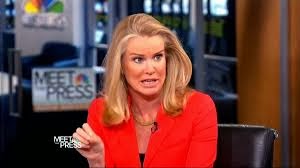 As this is the year of Newsnight at Is (well, at least until I get sick of watching it), let's continue where we left off with last night's Newsnight.

After Ed Balls's big-boned face had filled our TV screens (and accursed be he who invented Widescreen), it was onto the BBC's Katty Kay for a State of the Union report on Barack Obama's record.

As fans of David Preiser at Biased BBC (like me) will know, Katty is the business partner of Claire Shipman, the wife of Jay Carney, President Obama's official spokesman. (Has any other BBC reporter ever had such high-powered connections as Katty Kay?)

Katty talked to Chris Cillizza of The Fix, an influential reporter with the liberal Washington Post reporter and political analyst on the left-leaning counterpart to Fox News, MSNBC. She also talked to Robert Gibbs, someone very close to Barack Obama from the very start of his political career - and, coincidentally, another of MSNBC's top pundits. Next came MSNBC host Andrea Mitchell.

Hmm, is a pattern emerging here?

Well, as Katty herself often guests on MSNBC (sometimes alongside Chris and Andrea), this seemed quite an intimate MSNBC circle...

...and it got even more intimate as, amusingly, Katty's report contained a clip of Katty asking her business partner's husband, Jay Carney, a question at a White House press conference - and it was as lifeless an exchange as any between two people pretending not to know each other could possibly be!

Presented this way, this may sound like a case of extreme BBC bias, but Katty's report was surprisingly downbeat about Barack Obama's presidency.

Yes, she may have said that the Republicans are in an even worse place, but I can't imagine Jay Carney being entirely comfortable with it. It chronicled many of B.O.'s failures.

..unless, that is, it was part of what our Katty called the White House's 'reboot strategy'.

Barack and Jay's White House certainly does seem to be engaging in a 'reboot strategy'. Call me David Preiser, but this report could easily be seem as part of it.

Or, counterfactually, could it instead be called 'conspiratorial cogitation' which conversely counters the claim that Katty Kay could be colluding with Carney in a computer-comparison-connoting connivance to reboot Obama...and also (Jay...Kay)...to boost both alliteration and assonance as well? (One for Span Ows there).

Still, there followed a studio discussion which had a balance of guests: Jon Favreau, Director of Speechwriting for President Obama, 2008-13 (and, yes, that was exactly how Newsnight captioned him) and Leslie Sanchez, "Author and republican strategist" (as Newsnight's caption put it - and, yes, a 'sic' is needed after 'republican'). Both were suitably partisan.
Posted by Craig at 21:24