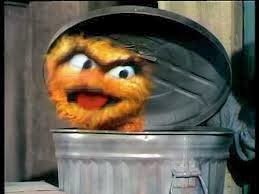 What with even the wonderful More or Less following the rest of the BBC and 'dissing' Channel 4's Benefits Street, it's time for a joke.

It's a joke that's cropping up all over the place, and all manner of people are passing it off without a tip of the hat to its creator.

Unfortunately, it's hard to know who its creator is. All we can say is that it's very unlikely to be Marcus Brigstocke, Mark Steel or Jeremy Hardy.

Having watched Benefits street, it's not much different to Sesame Street. Both have a big bird, a bloke living out of a bin, and people trying to learn the alphabet.

For those who missed the BBC's online coverage, here's a flavour of it (headlines only):