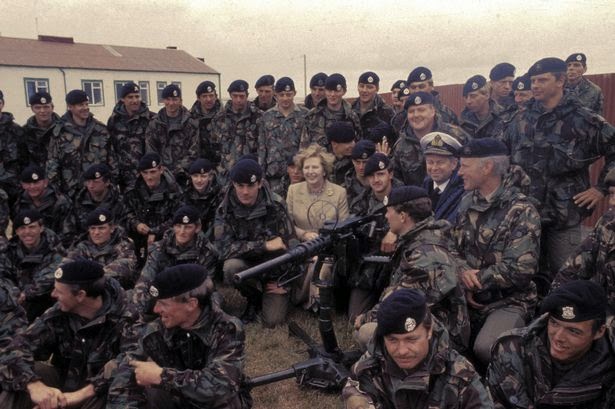 
This section from Steven Glover's Daily Mail article about the Clarkson Affair bears quoting in full:

On Tuesday night, BBC2 showed a programme called Suffragettes Forever [from around the 49:30 mark] in which the historian Amanda Vickery suggested Margaret Thatcher had let down the feminist cause.

In a reference to the 1982 Falklands War, she claimed Thatcher ‘did not shrink from personally ordering the sinking of an [Argentinian] troop carrier with the loss of over 300 lives’.

This was a reference to the Belgrano, a cruiser rather than a troop carrier, which was sunk because, in the opinion of British naval commanders, it presented a danger to our ships.

There was immediately a shot of Mrs Thatcher saying: ‘Just rejoice at that news, and congratulate our Forces and marines.’ We were invited to conclude that she had heartlessly said this in response to the sinking of the Belgrano.

But the truth is she spoke these words a week earlier, after British Forces had retaken the island of South Georgia without the loss of any British lives.

One Argentinian died, though Thatcher did not know this when she asked the nation to rejoice at the recapture of British territory which had been illegally seized.

In other words, that great hate figure of the Left, Margaret Thatcher, has been traduced once again by a supposedly reputable historian.

Will Amanda Vickery apologise? Of course not. Or Danny Cohen and Tony Hall? Not a chance. I’d like to see them submit to a Clarkson-style investigation, but they will sail blithely on.

Having watched that part of the programme for myself, Stephen Glover is completely correct about those factual inaccuracies and about the 'invitation' to viewers to conclude that Mrs Thatcher had behaved 'heartlessly' over the Belgrano.

All I would add is that Amanda Vickery also implied that Mrs Thatcher was uncaring as regards "health, community, poverty [and] children" and that she had some help in making the case that the first UK female prime minster let down the feminist cause from Kirsty Wark, who was largely of one mind with her over the matter.
Posted by Craig at 19:35