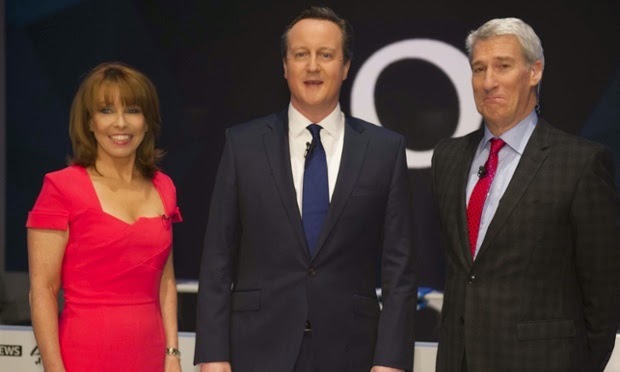 I suppose we ought to mention the rumble in the jungle. I disagree with whoever it was that declared Paxo the winner.
I thought he was hopeless. The aggressive approach that’s suppose to ruffle feathers and stimulate passion only creates defensiveness and a kind of special politician’s brand of inhibition. Instead of drawing out potential, it kills it off.  Hell yes.
So after all that evasiveness and defensiveness, we’re none the wiser. Kay Burley got a thorough pasting on the interweb. Yes, she does resemble a cat.

The only thing worth just mentioning - in my humble, not very impressed opinion - was a superfluous debriefing in the BBC’s ‘spin room’.
They interviewed  a small cluster of Labour supporters and Nigel Farage. “What did you think of it so far?” they asked people like Dan Hodges and Kevin Maguire. “Rubbish” came the reply.   “Who came across best?“ Ed’s passion, apparently.
They must have been watching a different programme from the one I watched.
After the Labour-luvvies plus the Ukip leader had given their verdicts, along came William Hague, and suddenly something went wrong with the sound.