The Islamic State vs the Assyrian Empire 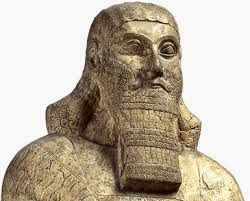 Please forgive me the following rant, but I need to get it off my chest...

As someone who has loved ancient history since childhood, Islamic State's pious destruction of the relics of the ancient Assyrian Empire beggars belief.

The Assyrian Empire was one of the cruelest and most successful of the ancient empires. It declared a 'universal empire'. It aimed, through shocking, awe-inspiring deeds of extreme violence, to inspire terror in the hearts of its enemies and, thus, make conquering them a doddle. It killed and destroyed on an unprecedented scale, grabbing massive amounts of land and loot, seizing large numbers of women, and enslaving populations.

It sounds a bit like Islamic State - except that the Assyrian Empire also went in for awe-inspiring art, while the self-declared Caliphate merely goes in for YouTube videos (and smashing up awe-inspiring art, like some turbo-charged Turner Prize contender).

The ancient Assyrians were about power. Islamic State is about power and religion (Islam).

Their moronic, religious impulses may have primitive origins but their appetite for destruction also seems strangely post-modern. I remember curling my lip in disapproval at the jokey relish with which Tim Burton imagined the destruction of mankind's most magnificent works in Mars Attacks.

It's enough to make you weep though, and I can hardly face reading about what they are doing.

It's good then that the BBC have been making this unforgivable crime against humanity their lead story online for much of the afternoon.

Characteristically, however, their main report (and its accompanying video) remains noticeably shy about explaining the explicitly religious (i.e. Islamic) motivation behind these determined atrocities against our shared history (or, for that matter, giving much historical background at all).

The periodic phases of iconoclasm in early medieval Byzantium and at the dawn of Reformation England are depressing stains on western civilisation. Such brief, pious forms of hysteria seemed to be (very firmly) confined to history but, thanks to (Saudi) Wahhabi-inspired Islamic revivalists, they're back with a vengeance.

The BBC really needs to get off its 'culturally-sensitive' backside and start properly explaining the danger we all face from these pre-modern/post-modern Muslim loons.
Posted by Craig at 17:20