I’m not religious. It’s not so much that I do or don’t believe in God - It’s more of an absence of belief. There are more pressing things to worry about, or for that matter, to believe in.

Many British adults with secular tendencies (lefties, progressives, creatives, centre-righties, lapsed Christians, apostate Catholics, cats, dogs and English-speaking parrots) have rejected the religion they know most about (Christianity) because of the prudish, retrograde morality that used to blight people’s lives in the days when ‘high church’ and piety were regarded as ‘good‘ and original sin needed to be exorcised by prayer and penance and doing good deeds.
Although most secular souls might retain a vague, waffly idea that God is ‘within us all’,  the underlying concept that ‘God is love’ is out. God is love is the baby that was thrown out with the bathwater. Many non-believers have dispensed with the whole thing, bathtub and all. No God; no sky faries.

So, if all the old fashioned religious ideas of what constitutes immorality (being gay, illegitimate, and all the other ten commandment-type sins) can be dispensed with, as well as the concept that God is love, how can it be that another religion, Islam, can persuade so many rejectors of Christianity that Islam, with its God Allah, its prophet Mohammed, its dogma and its worldview is a credible way of life for British citizens, which we must all accommodate? Furthermore, how can we accept, despite all the evidence to the contrary, claims that it is a religion of peace?

The current situation seems to be that you can’t entertain the idea that God is love; you are inclined to reject religion altogether. You are not particularly acquainted with the fundamentals and the trappings of Islam other than a vague notion that the violence and atrocities we hear about in the news are ‘nothing to do with Islam’, yet you are eager to give Islam’s claims of peacefulness, Godliness and plausibility  the benefit of the doubt?  I just can’t make sense of that.

Muslims have inveigled ‘secularist cultural non-Christians’ into respecting and kowtowing to much of the claptrap that goes with their religion as well.
The BBC appears to have overturned a nationally accepted commonality that used to cover everything. Satire, humour, diet, dress, figures of speech, turns of phrase - for fear of offending Muslims.

Is it rational that we are still seriously expected to embrace Islam, absorb it, depict it from the premise that, in its ‘true’ sense, it’s a force ‘for the betterment of mankind’, despite the ever increasing list of Islam inspired violent Jihadi practices and cultural atrocities and taboos that dominate the news, day in, day out?

How can the BBC give credibility to people like, well, need I give a list of the BBC’s pet Islamists? They must be laughing their heads off (if you’ll forgive the allusion) at our gullibility.

I was going to post something about the Sunday before last’s The Big Questions, the one about apostasy, but matters conspired against. (flu) The lone apostate who set the scene was Amal Farah, who bravely held her own despite the voluble hostility all around. She said “I don’t regard Mohammed as a prophet”, something I think goes for a great many of us. Evidently not the BBC though. It has recently started referring to “Friday prayers‘ in a very familiar fashion, as though praying in a mosque is part of everyone’s Friday. The BBC is not only sucking up to Muslims, but is trying to ‘be like’ them.

Since the topic was amply covered by Harry’s Place, instead of reiterating the points made by commenters and the poster ‘habibi’ I’ll just make a couple of observations.

First, isn’t it remarkable that supporters of Islam are incapable of shutting up? For representatives of the religion of peace, they all behave with a unique type of belligerence and rudeness. Not in the slightest peaceful.

Mohammed Shafiq is shouty and disagreeable. He admitted he was wrong to call for the murder of Maajid Nawaz for tweeting about the Jesus and Mo T-shirt, which he did in Urdu, so that people in Pakistan, where they kill people for all sorts of minor transgressions, might have been minded to actually carry out that deed. He claimed it was tweeted in the heat of the moment.
Luckily for him Maajid Nawaz is still alive, so presumably Shafiq believes an expression of regret (for inciting murder) is enough of a concession to re-establish his position as spokesperson for the Muslim community and one of the BBC’s foremost, go-to Muslims.

The Muslims weren’t the only belligerent contributors. Kate Smurthwaite was pretty excitable, and hard to shut up. She looks so like the Queen of Hearts. At any minute she might say “Off with their heads” 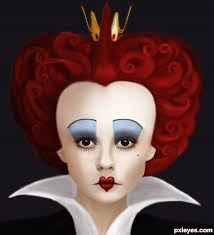 Abdullah al-Andalusa is a convert whose muse is Haitham al-Haddad.  Someone drew attention to a twitter feed in which he announced his forthcoming appearance on the Big Questions. An assortment of prayers and advice on how not to be tricked by Nicky Campbell ensued.

“Razaul Karim You will ne ambushed, you will be asked if you think the apostate should be killed, you will be asked what do you think about the Islamic verdict should one be killed. You have to show they to have corporal punishment, so every nation has boundaries for which they apply the corporal punishment. You have to go on the offensive. May Allah guide you and bless you for your efforts.”

......and very prophetic it was too. He was asked if he thinks the apostate should be killed, but he wriggled out of it by redefining apostasy.  I don’t know if Allah did guide him, but I’d guess not.

One of the reasons I find it hard to accept Islam in the same way that the BBC does, and urges me to do too, is that I know Muslims are encouraged to hate me. The BBC knows this, but doesn’t care. To me it seems as if antisemitism is a minor issue if it’s expressed by a Muslim, whereas from a non-Muslim it’s racist. Unless it’s branded anti-Zionism of course.

Another programme I caught up with on the iPlayer, which had gone out on BBC3, concerned a beauty contest called something like  “International Miss Muslima”.
The presenter and contestant was a Muslim version of Stacey Dooley; giggly, conspiratorial and a bit thick. The audience was sucked in, so that they felt sympathetic to her plight, her awareness of the strangeness of ‘foreign’ Muslims, her surprise at some of the differences between what was acceptable to British and non British Muslim women.
In some ways our heroine was more inhibited by her religion than some of the ladies from Islamic countries. They sang Karaoke in public, for example, whereas she certainly would not.

Dina Torkia, our presenter, swearing, laughing, flirty, confrontational, wouldn’t stay in a house where a man was staying. She couldn’t.
When the girls found out that the whole shebang was corrupt, fixed, riddled with ludicrous, farcical conditions and anomalies, our heroine decided that these deceits could be excused because the outcome was good; they chose, albeit accidentally, a worthy winner. She looked decidedly anorexic, and nobly dedicated her win to all the oppressed Muslims, particularly those poor oppressed Muslims in Gaza and Syria.  So there you have it. Another of the BBC’s attempts to sanitise lunacy.