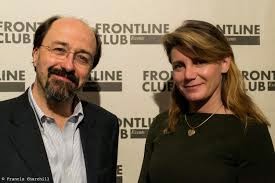 I can't say I'll be watching it (though others will) but we're only a few minutes away now from the Storyville programme The Great European Disaster Movie on BBC Four. It has been widely trailed, and everyone from Nigel Farage to Dan Hannan has denounced it as a "pro-EU mockumentary".

It is said to depict a terrible post-EU future with the far-right rampant, ISIS at the gates of Vienna, and Nigel Farage as prime minister of "Great England" busily deporting  immigrants en masse.

The programme has been written by Dateline London regular Annalisa Piras (their "voice of Italy"), whose pro-EU credentials are impeccable, and ex-Economist editor Bill Emmott, who's not as left-wing as Annalisa but just as pro-EU.

The controversy has deepened because UKIP MP Mark Reckless has said that Bill Emmott told him that the BBC received EU money to finance the film - which, if true, is utterly outrageous. It's something the BBC denies though.

And Peter Hitchens gives an account of the behind-the-scenes frenzy at the BBC over the programme that rings true to me:

Even the BBC sometimes grasps that it has gone too far. And 11 days ago, it went into a five-star panic over its plan to show a more-or-less crazy pro-EU film tonight.

I assume that, spooked by the derisive reaction to its laughable pro-Labour drama A Casual Vacancy, its chiefs suddenly realised that they had another embarrassment on their hands. The planned transmission was abruptly cut by several minutes, losing a large chunk about the migration wave across the Mediterranean.

And this helped make space for a post-programme discussion, heavily loaded with critics of the European Union, including me, former Chancellor Norman Lamont and Ukip MP Mark Reckless. This is really a figleaf to cover its naked bias, as you will see when you watch it tonight.

I took part because it seemed silly to miss any opportunity to make the case for British independence.

I'm very happy for Bill Emmott to make as many films as he likes for the BBC about the wonders of the EU.

The trouble is, you cannot imagine the Corporation giving anyone the chance to make a film about how miserable it will be if Britain stays in, and how good it will be if we leave.

For this programme is blatant propaganda. And the only cause for joy is that it's not very good propaganda. A doomed plane is zig-zagging across a divided, blacked-out Europe, bearing Angus Deayton and a little girl who has supposedly been deported from a xenophobic, cruel England because her mother isn't paid enough.

This provides the excuse for a patronising series of lecturettes from Mr Deayton.

Everything about it is run through with the stupid, ill-informed prejudices of the BBC. Opponents of the EU are portrayed as 'anti-European' nostalgists and haters of abroad. Opponents of immigration are portrayed as dislikers of immigrants. Things which are the EU's own fault, such as its self-inflicted economic crisis, are not blamed on the EU. Wild fantasies are explored in which a British departure causes everyone else to leave – though why they would, if it is so wonderful, I cannot tell.

Baseless guff, about how the EU has brought peace, is repeated unquestioned. In fact, to the extent that it has had any influence on war and peace, the EU has brought war, most recently thanks to its aggressive push into Ukraine.

Winston Churchill's Zurich speech of 1946, which it partly quotes, is a plea for continental Europe to unite, with Britain, the USA and the USSR acting as outside sponsors. Oh, and the Berlin airport for which the fictitious plane is originally bound closed in 2008, as anyone who knows Europe would be aware.

After the film's preview at The Frontline Club [h/t DB on Twitter], a member of the audience told the film makers:

It was ideologically and intellectually highly loaded. You have a number of prominent journalists, intellectuals… all very explicit and putting the case very clearly. And against that you have a very narrow-minded councillor from Margate who is scared of foreigners.

We thought if we went into trying to give both sides of the arguments for all these very complex issues we wouldn’t have survived. We would have died in the process.