Meanwhile, in another universe...

The cybernats are not happy bunnies today.

They are (as ever) very active on the Twitter hashtag #bbcbias, busily tweeting each other messages like the following:

wow the #bbcbias channel now trying subliminal messages. It's not done in error

@BBCNews @BBCNewsnight @BBCPolitics your bias against the SNP is the REAL THREAT to democracy! #BBCBias

More incredible BBC bias. They don't even try and hide it anymore. (Too funny)

If you needed proof of BBC bias toward SNP, here it is @boycottTheBBC @daily_politics @theSNP @afneil

And what exactly has got their goat today (mixing my animal metaphors)? Well, this: 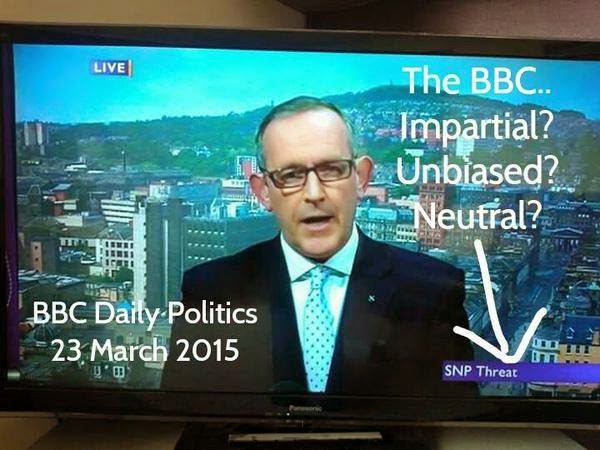 Now, I think I know what the BBC's trying to say with that caption but I don't think the cybernats would entirely buy that explanation.

Anyhow, you're now beholding an image (above) which is surely destined for thousands upon thousands of tweets and re-tweets from now till infinity...or at least until Scottish independence.
Posted by Craig at 21:13