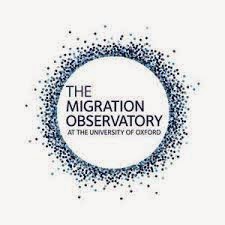 The Oxford Migration Observatory doesn't take kindly to being accused of bias. (It's like the BBC in that respect.)

The Daily Mail ran a hatchet-job on them a few years ago. The paper quoted Labour MP Frank Field claiming it had been set up "to try to undermine’ MigrationWatch", that it was "trying to use the status of Oxford University to peddle Left-wing views on immigration", and that it was "a propaganda effort to change public opinion on immigration".

The Oxford Migration Observatory advisory board promptly put out a statement in response rejecting such charges:

The Migration Observatory is neither 'pro-immigration' nor 'anti-immigration' and this is clear to anyone who visits its website, uses its materials or encounters its media output. We would invite anybody who has questions about this to visit the site, scrutinise it thoroughly and notify the Observatory if they find evidence of anything other than political independence.

I have to say that my experiences of listening to experts from the the Oxford Migration Observatory have led me more to Mr Field's point of view than to that of its advisory board. Regular readers may recall Radio 4's use of its director, Madeleine Sumption, for an extraordinarily biased series of reports on The World Tonight a couple of months back - and Madeleine Sumption certainly sounded pretty 'pro-immigration' to me.

As befits a pair of organisations that get accused of being biased (in favour of mass immigration) but which insist they aren't, the BBC and the Oxford Migration Observatory seem to get along well. Their work is regularly and uncritically reported by the BBC...

....unlike that of MigrationWatch, which, even now, is kept at arm's length from the BBC, and sometimes gets the 'pressure group' or the 'anti-immigration' label shoved on it by the corporation - a sign of 'bias by labelling'.

Just to remind you of how determined the BBC could be to undermine MigrationWatch, especially in its early days (when it was correctly predicting what no one else dared predict - least of all the BBC), please re-read an earlier 'Is the BBC biased?' post (from 2012) called 'Who got it right - Migration Watch or the BBC?' It offers a startling reminder of (a) how wrong the BBC got it and (b) just how unsympathetic some BBC reporters could be towards MigrationWatch.

The offending BBC reporter back in 2002 was BBC home affairs correspondent Dominic Casciani. And, as you're probably aware, he's still in place at the BBC. Indeed, he's been the main reporter on today's extensive BBC coverage of a new report of immigration since 2011 by...the Oxford Migration Observatory.

Bias by labelling — Bias by labelling comes in two forms.  The first is the tagging of one set of politicians and groups with extreme labels while leaving the opposing politicians and groups unlabelled or with more mild labels, or vice versa.  The second kind of bias by labelling occurs when a reporter not only fails to identify a liberal as a liberal or a conservative as a conservative, but describes the person or group with positive labels, such as “an expert” or “independent consumer group”.  In so doing, the reporter imparts an air of authority that the source does not deserve.]

Here's how Dominic Casciani began his discussion with John Humphrys on this morning's Today:

These figures from Oxford University's Migration Observatory, which are an expert body trying to put figures in the public domain in a politically neutral sense...

Now, Dominic Casciani could, of course, be completely correct about them, but in so (generously) describing them he's clearly trying to influence Today listeners into seeing the Oxford Migration Observatory as the voice of impartial truth - the migration-watching equivalent of the BBC itself.

If anyone ever hears Dominic describing MigrationWatch as "an expert body trying to put figures in the public domain in a politically neutral sense", please let me know. My hat stands ready to be eaten. And several pigs are on standby to take to the air.

Dominic's discussion with John Humphrys (at around 6.33am) remained wholly uncritical of the Oxford Migration Group throughout, presenting them as careful academics and reporting their findings as being as close to the truth as we're likely to get.

Without naming names, however, Dominic suggested that certain other migration-watching groups might aren't believable. Now, who could he possibly be having a dig at there?


John Humphrys: And will this figure [the figure for the total number of immigrants living in the UK] strike people as being bigger or smaller than expected?

Dominic Casciani: I think there are lots of ways of calculating this. So some groups would put the figure higher, especially if you take into account the possibility of illegal migration which can't be counted. I think some people...other people would suggest this is overplaying it.

Then he went on to say that his own research showed that the Oxford Migration Group had it "about right", thus placing himself with those "other people" who suggest groups (like MigrationWatch) are "overplaying it".