Jonathan Sacerdoti vs. The World (According to the BBC) 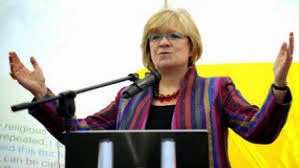 Mea culpa, therefore. Having watched the first few minutes of today's Dateline, I saw red - or, more specifically, saw Palestinian extremist Abdel Bari Atwan - and switched off, hurrying instead to 'Is the BBC biased?' to do some further research on the programme's guest selection and point out its mad (and maddening) bias (see previous post) towards ol' Bari.

Sue, however, encouraged me to watch the whole thing though - and quite right too, because I missed a lot...

I'd failed to hang around long enough to hear flame-thrower Abdel Bari Atwan, talking about Benjamin Netanyahu, and saying, "He split the Jews himself". Yes, Jews. Not Israelis. (What is it with people with aggressive moustaches?)

I'd also missed his fellow flame-thrower, absurd, earnest, ranting, well-past-her-sell-by-date, ex-BBC home affairs editor Polly Toynbee, characteristically bolting to the extremes and calling Mr Netanyahu "far right". [Various other examples of Polly's tendency towards name-calling flew around during the British politics section at the end too - and two can play at that game, Pol.]

And I'd missed John Fisher Burns, the "dean" of the U.S. press corp [who I rather like and who is, on the whole, a reasonable man], complaining about Israel's behaviour, (like Bari and Polly) calling for for a U.S.-Iranian rapprochement, and blaming the West. (He clearly has some blind spots).

Jonathan Sacerdoti's lonely, embattled presence as a defender of Israel [and my way of thinking] was something to be grateful for - but not too grateful for, given what Dateline flung at him. He was attacked on (at least) three fronts. (He made a decent fist of it though, in spite of everything hurled at him.)

I recall a comment I made at Biased BBC back in 2011 [which I can't, unfortunately, link to, but which I saved in my own drive when B-BBC was having technical problems], following Jonathan's first appearance on Dateline. I complained about how he "faced regular interruptions" from "Atwan, Polly Toynbee and Esler (and a couple of "I'll come back to you in a second"s from Esler to boot)". [I was far less polite back then].

Plus ça change, plus c'est la même chose, as Dateline's very own Marc Roche might say.
Posted by Craig at 21:13