Over a Not a Sheep's blog, he's posted a striking selection of tweets from the BBC's Middle East editor Jeremy Bowen, taken from the past three days.

That sequence shows Jeremy Bowen posting a mocking ad of Benjamin Netanyahu from one Israeli opposition grouping, the Arab Joint List, plus a tender photo of the leader of the Arab Joint List and his young son - the only such sympathetic photo tweeted by the BBC man.

It also shows Jeremy Bowen passing on the opinion of just one Israel voter and, guess what, he's a "frustrated" one "disgusted" by Mr Netanyahu!

Plus it shows Jeremy Bowen employing loaded language - "mastery of scare tactics" to (as Not a Sheep puts it) "cast aspersions on why Benjamin Netanyahu won".

And, furthermore, it shows Jeremy Bowen giving his characteristically spin on why the Likud leader won - an 'analysis' that drew a response from Colonel Richard Kemp:

.@BowenBBC You are looking at this situation in a very unsubtle way. It is much more complex than it may appear to an observer.
— RICHARD KEMP (@COLRICHARDKEMP) March 18, 2015

Sue and I have been watching JB's Twitter feed too, but I completely missed something that Not a Sheep spotted. On the morning of the election, came this: what Not a Sheep describes as "just the sort of view of Israel that you'd expect from Jeremy Bowen":- 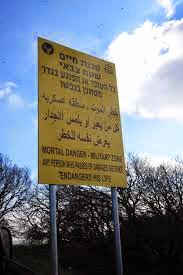 Who, other than a BBC reporter who doesn't really like Israel, would tweet that image to the world accompanied by the caption, "this is one place I've been today, previewing elections in Israel"?
Posted by Craig at 20:26