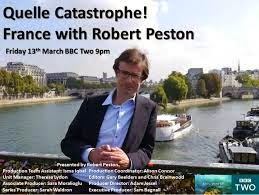 I did - and I enjoyed it too. (Reservations, vis a vis bias, will also be found below).

It told the story of how France's massively expensive, taxpayer-funded post-war social model, which used to seem so alluring (to the likes of Robert Peston), has been living on borrowed time for some time, and is now falling apart at an alarming rate. The French economy is tanking, unemployment rocketing. Malaise is gathering everywhere.

Robert Peston laid out what he sees as the causes, including: severe over-regulation which chokes French competitiveness; a hugely expensive and all-embracing welfare state; over-powerful unions; incredibly prescriptive and wide-ranging workers' rights; extravagant public spending (with little regard for value for money); a fear of renewed riots (on the part of the political class); and a self-serving elite who are taught a single way of thinking, etc.

Did you know that 57% of France's national income goes on public spending?

Robert also made it clear that President Hollande's initial attempts to keep the whole thing going with more of the same, plus additional punitive taxation, merely led to a further worsening of the situation.

We got a broad spectrum of views, with both defenders and critics of the French system having their say. There were union officials, unemployed steel workers and Jean de Florette-style farmers on one side; and exasperated small businessmen and government ministers on the other. There were also grown-up interviews with figures from the Front National, including Marine Le Pen.

Robert Peston's criticisms of the Front National weren't the usual (BBC) ones. His point was that the party's hard-left economic policies (not that he quite put it that way) won't rescue France from its present plight. In fact they are precisely the kind of policies that have landed France in its present mess in the first place:

The point is that the policies championed by Le Pen - protection of workers' rights, lavish benefits for the French middle classes - produced very high levels of long-term unemployment.

He was also good at pointing out the crisis faced by the European Union's elite.

His own pro-EU instincts came though, however, I think, in his concluding warning about what might happen if Marine Le Pen took France out of the EU, established its own currency again and pursued protectionist policies:

A vicious slump could follow which would impoverish not only France but also its neighbours - us.

Is he right about that? Isn't that just pro-EU scaremongering? And what about France's current involvement with the euro? Hasn't that played a part in preventing France from tackling some of its present problems?

Plus the programme seemed to avert its eyes from investigating the part that mass immigration (especially non-EU mass immigration) could be playing in exacerbating France's malaise. (Immigration was merely something that the Front National talked about.)


My country and all the countries in Europe are at a crossroads. The coming months and years are going to be decisive. I couldn't care less about the European Union. What I'm concerned about is my country. It's to my country, to the French, that I have a duty. It's their wellbeing I have to think of, their prosperity, their security. The European Union we see today has been a total failure. There's no more left or right. There are nationalists and globalists. That's the big demarcation line that determines the fate of the world today.

Robert was clearly on the side of the globalists throughout this programme.

Here are a few of my personal highlights from Quelle catastrophe!:

Robert Joseph [vineyard owner]: What we all love about France, all this patchwork of vines and villages, behind it there is an intensely structured system. A man in this village will be told the grapes he's allowed to grow. Every little bit of vineyard here has to be rubber-stamped eventually by some minister in Paris. Everything you do involves a piece of paper. And in France, they complain about it but they kind of accept it because it is part of this feudal system: I expect somebody above me to sort my life out. In return that I will fill in the form in triplicate and let them have it.

And then there's the Code du Travail [France "Big Red Book"] - a monster book of employment rights dating back to 1910 - the latest edition containing 3,600 pages of rules:

Agnès Verdier-Molinié [economic historian]: We've weighed the Code du Travail. In 1990 it weighed 500 grams, now it's almost two kilos. For an employer it's impossible. It's too complicated. The spirit of the Code du Travail at the start was to regulate the relations between employers and their employees. It's a terribly French idea of protecting employees against their employers. That employers will have to be guided at every stage.

Agnès Verdier-Molinié: Something that would be unbelievable to a British person: In France a woman who takes maternity leave doesn't hae to say when she's coming back. She can take a year's leave, then another year and another. And the worst part is that at any time during her maternity leave she can resign to take a different job that she thinks fits in better with family life. But in the year following her resignation she can go back, saying 'I've changed my mind, I'm coming back to you after all'.

And, on the French bureaucracy...

Robert Peston: France spends significantly more than the government collects in taxes. And the country's massive public spending is presided over by a bloated army of more than 5 million bureaucrats. These public sector workers, especially here in Montpelier, seem to be off work quite a lot of the time. Its public servants have an absentee rate greater than in any other French municipality at 39 days per worker. Now, when you add in holidays that means they're out of the office for a full 90 days - that's a full third of the working year. [The locals's explanation is: "It's because of the sun].