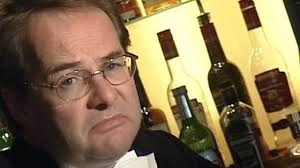 I was slightly worried, you may recall, that the Daily Mail's Quentin Letts might lower the quality of the superb series of Lent Talks now running on BBC Radio 4.

I needn't have worried. Quentin managed to hit the spot again. He was typically jaunty, but not without this moments of depth.

His theme was the theatrical potential of the Passion story, as realised in the medieval mystery plays that he, his family, friends and neighbours, still perform from time to time.

Here are some samples:

Is it disrespectful to compare Holy Week to a drama? I hope not. Drama can be a form of high art, illustrating elusive truths by means of plot and personality. From Palm Sunday to Easter morning, the Passion has everything required of great theatre. Misfortune's screw tightens. There is betrayal, political manipulation, heroic determination, death. Christ gives up the ghost at Golgotha - the field of skulls, which may take us back to poor Yorick. And then, if we can hop to another Shakespeare tragedy, there is a storm, cataracts and hurricanoes, the heavens opening. This was the moment in that 1965 film, 'The Greatest Story Ever Told', that John Wayne says 'truly, this man was the son of God'. Hollywood may have hijacked the line but it is there in Matthew and Mark, albeit without the Texan accent.

Betrayal is a boost to any theatrical plot. Holy Week has Judas Iscariot, his name a byword for treachery. A shrewd dramatist will not caricature Judas as evil. Merely to ham him up, eyes a-gleam as he fingers his slivers of silver, would be to throw away the character. It would not be truthful to human nature. Judas had believed in Jesus but he suffered doubts. Though Judas is now reviled, what Christian can claim never to have had doubts? One of the worse slanders on churchgoers of late has been this notion of swivel-eyed certitude, this coarse, clumsy idea that 'faith' pings on like an electric light bulb and that anyone who attends church is ‘devout’. Tosh. Many of us go to church hoping to believe, or because we are curious, or because we enjoy the old hymns and the proper prayers. Belief may take hold slowly, unevenly.

Uncertainty is essential to faith. Without doubt, belief becomes nothing more than factual obligation. Faith demands a leap across a gap. Judas baulked at that gap, poor man. A theatre director has a chance to show us this truth in Iscariot. How long does it take Judas to realise that he had made a ghastly mistake? How long does it take the Apostles to forgive him? The Bible does not tell us.

The Last Supper's most celebrated depiction in art, by Leonardo da Vinci, conveys little drama. Leonardo's upstairs room has the rigid lines of a multi-storey carpark. I prefer Tintoretto’s bustling Last Supper. A kitchen helper is in the foreground, packing dishes. A cat pokes its whiskers into the dirty plates.

Tintoretto's painting says 'this happened, this was human'. The Passion should not be muffled by hesitant politeness. Let it surge, pulsate, brim with life. These disciples must have been excited and fearful about the discreet rendezvous. Imagining those days, re-creating them in drama or art, can help us see the Passion anew. 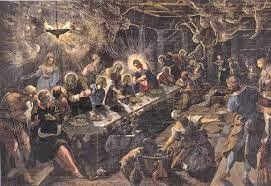