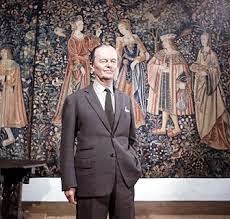 Ed West has an interesting article at the Spectator called, What’s the point of the BBC if we no longer share common cultural values?

His argument is that in the days when the BBC produced such marvels as Lord Clark's Civilisation, the corporation was speaking to a country that "had a clearer identity", a national sense of "we":

There was also an understandable set of cultural values and attitudes shared by the population: attitudes to everyday moral questions, to our view of the past and our understanding of ourselves as a country.

The BBC shared in that common culture.

Then came the "counter-culture" (between the 1960s and 1980s) which "overthrew that old order" - a cultural revolution which sought to to rid us of that sense of "we" - rooted, as it was, in British/European civilisation and Judeo-Christian values -  and to replace it with something else.

These revolutionaries "now assume they are ‘the’ culture (while also not admitting to their actual power, because being powerless is prized as a virtue)", and Ed notes that the people who run the BBC are "overwhelmingly" drawn from this new elite.

Though they "now assume they are ‘the’ culture", many British people don't share their outlook and quite a few completely reject it. The common culture has fallen apart. There's no longer a common "we" for the BBC to speak to.

And therein lies the danger for the BBC; that what comes around goes around:

The liberal-Left faces the same problem that all regicides and revolutionaries do; once you have overturned the rules and assumptions of the previous culture, what’s to stop someone else doing the same to you?

And the even bigger danger (for the BBC) that its own 'reason for being' becomes untenable, as:

...if there is no ‘we’ anymore, common cultural institutions are harder to justify.

What first drew me into the world of 'BBC bias' blogs was the feeling that the BBC wasn't just unconsciously reflecting the worldview of the liberal-Left but was, to some degree, very consciously promoting that worldview - on issues like the EU, the benefits of immigration, the unalloyed advantages of multiculturalism, the correctness of spreading progressive social attitudes, etc...

...or, in other words, that the BBC was trying (very hard) to create a new common "we" for Britain - a "we" built on a sort of perpetual London Olympics 2012 opening ceremony vision of a happy-clappy, multicultural, socially liberal, politically progressive, NHS-idolising country. And as for those who don't like it, well, they could lump it - or be sidelined, barely tolerated or belittled.

If the BBC had worked, much harder, much earlier, to assuage the disgruntled parts of its audience (however large or small they may actually be) by tackling what "we" continue to regard as the corporation's engrained institutional biases then it would, perhaps, be on much safer ground now.