The left, Israel and being Jewish 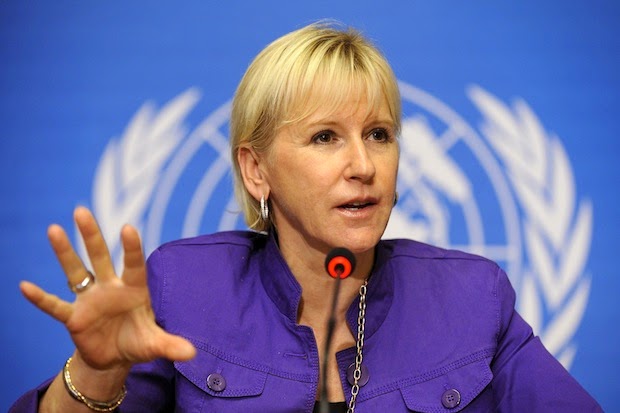 Nick Cohen has written a piece in the Spectator which I find odd. It concerns the Swedish foreign minister Margot Wallström, who has denounced the subjugation of women in Saudi Arabia, condemned the Saudi courts for the harsh punishment of blogger Raif Badawi, and, really, criticised a whole raft of medieval practices that Islamic countries are ideologically wedded to. What took her so long?

Sweden used to be the model of laid back liberalism. It was a country full of golden-haired goddesses who liked to live and let live in the most modern and free thinking fashion. Now, its tolerance and free-thinking has attracted a mass influx of radical Islamists and the country is famous because it has become the rape capital of the west.  Sweden has embraced pro-Palestinian advocacy of course.

She’s in trouble for speaking out. Nick Cohen is full of admiration for the plucky Swede.

“It is a sign of how upside-down modern politics has become that one assumes that a politician who defends freedom of speech and women’s rights in the Arab world must be some kind of muscular liberal, or neocon, or perhaps a supporter of one of Scandinavia’s new populist right-wing parties whose commitment to human rights is merely a cover for anti-Muslim hatred. But Margot Wallström is that modern rarity: a left-wing politician who goes where her principles take her.”

This is all well and good. We admire her for suddenly seeing and articulating the obvious, and we’re full of contempt for those who refuse to see what’s in front of them. Like Nick Cohen, everyone should be horrified that “the Swedish establishment has gone wild.”

We are, we are. However, this next bit is extremely problematic. You’ll see why.

She is foreign minister in Sweden’s weak coalition of Social Democrats and Greens, and took office promising a feminist foreign policy. She recognised Palestine in October last year — and, no, the Arab League and Organisation of Islamic Co-operation and Gulf Co-operation Council did not condemn her ‘unacceptable interference in the internal affairs of Israel’. I confess that her gesture struck me as counterproductive at the time. But after Benjamin Netanyahu ruled out a Palestinian state as he used every dirty trick he could think of to secure his re-election, she can claim with justice that history has vindicated her.

I don’t expect every opponent of radical Islam to understand Israeli politics, and I don’t assume Nick Cohen has to be an admirer of Benjamin Netanyahu in order for his opinion on the Islamization of Sweden to count. But I do expect him to have a little more understanding of Netanyahu’s tactics and the desperate predicament his country faces than to declare that Wallström’s ill-advised, premature recognition of ‘Palestine’ has been vindicated by history.

It’s almost as if Cohen has used her recognition of ‘Palestine’  to excuse her, or to give her more credibility - with the readership of his article, as well as with the Swedish government and the EU.
I looked at the comments to find out if any of the responses picked up this point. One or two did.
This has a tenuous but valid relationship to the way the BBC presents the Israeli / Palestinian situation.

That was a ‘leftist’ issue, and so is this.   H/T Harry’s Place  This piece in Tablet (the Jewish, not the Catholic) examines Ed Miliband and his position regarding Jewishness and his attitude to Israel. It opens:

“In a packed conference hall in Islington, north London, the disembodied voice of Omar Barghouti is calling in over Skype. The co-founder of the Boycott, Divestment, and Sanctions movement exhorts the crowd to renew their efforts for the Palestine Solidarity Campaign (PSC), which is holding the meeting. He derides and denigrates Israel, the apartheid state. And then, his rhetoric building up to a pitch, he delivers his killer line: “Balfour is dead, now let’s bury his damned colonial legacy.” A loud cheer echoes around the room.” It’s a good read. Ed wants to be PM, so some of his ambivalence is understandable, given the state we’re in. (Largely Labour’s doing) There is one jarring note in this piece. It’s in this bit here:

“ Geoffrey Alderman points to three major factors that have driven British Jews to the right. First, the community has been upwardly mobile and become more and more established as an upper-middle-class group in British society, making it naturally more conservative. Secondly, philo-Semitic Tory leader Margaret Thatcher also came to power in the north London constituency of Finchley, appointing several Jews to her cabinet and ushering in an era of market-driven economics that has been kind to the Jewish community. Many Jews living in north London and voting in the upcoming election will be just as exercised by Labour’s planned “mansion tax” on expensive houses as they are about Israel.”

The writer needs to bear in mind that though there may be some truth in the last sentence, without qualification it’s sailing dangerously close to the infamous Tim Willcox ‘mansion tax/wealthy Jews’ remark, which was taken to be an antisemitic slur. Whenever people refer disparagingly to ‘those wealthy Jews’, and I’m sure there are quite a few successful Jewish business persons, they should remember who’s  buying up half of london these days. If we’re talking about money, power, control, lobbying, and wealth beyond the wildest dreams of Mr and Mrs normal, the Arabs beat the Jews hands down.

Apart from that, there is one heroic Labour MP. Michael Dugher, MP for Barnsley East. (Speech at 'We believe in Israel" conference 2015.) Is he the UK’s Margot Wallström?