BBC in the CAGE 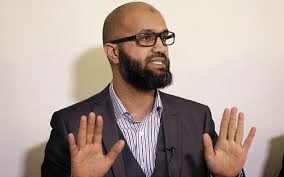 Last night's This Week on BBC One handed over its 'The Take' spot to Asim Qureshi of CAGE.

Let me repeat that: last night's This Week handed over its 'The Take' spot to Asim Qureshi of CAGE.

Yes, Andrew Neil subsequently skewered Qureshi, exposing him as the slippery apologist for Islamic terrorism that he truly is, but still: last night's This Week handed over its 'The Take' spot to Asim Qureshi of CAGE. And then interviewed him at length.

The BBC also broadcast CAGE's press conference in full, after "beautiful" Enwazi was exposed. And CAGE representatives have hardly been off the BBC ever since. Their propaganda has been all over the place - from today to 5 Live, from the News Channel to BBC One's main bulletins.

Michael Portillo really said it all:

I think, despite all his cleverness, that Asim comes over as an apologist for Emwazi, and I haven't been able to turn on the BBC all week without hearing you and seeing you, and just wonder what the BBC is doing, giving you all this airtime.

I really don't know what the BBC is doing, giving you all this airtime.

The idea that - because of its commitments to free speech, democracy and impartiality - the BBC should not, in principle, completely exclude Qureshi & Co. from its airwaves is a reasonable one.

However, leaping from that to plastering them, willy-nilly, all across the BBC, on programme after programme, and broadcasting their propagandist press conferences in full is a very different matter.

The BBC is under no obligation whatsoever to do that and hardly any licence fee payers would expect them to do so, or want them to do so.

The BBC, quite frankly, has gone CAGE mad. They need to stop pandering to such people NOW.
Posted by Craig at 19:28