"I don't think they were aware of what they were doing" 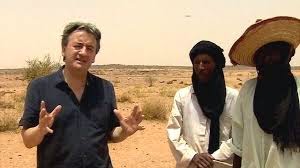 Oh my! Fergal Keane was 'fergal keaning' splendidly on this morning's Broadcasting House.

Reporting from Tunisia, he clearly felt the hand of history on his shoulder:

If you ever wanted an example of how the past can lay claim to the present, it's here and now.

Sad voice. "The problems of unemployment, of lingering police repression, continue to cause alienation among many young men". There are "people looking purposeless" in poor districts - the kind of people drawn to the call of jihad.

Of course, it's easy to be cynical. Fergal also found some interesting responses: He spoke to a campaigner against jihadism who was angry at the Tunisian government for failing to take notice of the ongoing warnings of anti-jihadi protestors about the terrorist threat; and a crowd rushed towards him, having seen he was a Westerner, to offer their condolences. One man said, with deep passion, that Tunisia should be a place for everyone, "even the Jews".

One of the ways that bias in any kind of reporting could be monitored (it's recently struck me) is to check out how the report ends. What message does it choose to end with? What final thoughts are left lingering in the listener's ear?

Well, this is the message that Fergal chose to end on. It came from the imam of the local mosque:

Well, I do think there might have been religious reasons behind the act. Knowing that they would almost certainly be killed after carrying out their atrocity, I'm not convinced by the imam's "lured by money" excuse. And I very much doubt they weren't aware of what they were doing in going to Tunisia's national museum, fully-armed, and slaughtering every white face they could see.

I suspect Fergal Keane chose to end his piece with that absurd statement from the imam because it puts across a couple of messages that he, Fergal Keane, also wishes to put across: (a) that such terrorist atrocities have nothing to do with Islam, and (b) that there are reasons (unemployment, poverty, police repression - the examples he cited earlier in the report) which might explain why these alienated, purposeless young men go off beheading, shooting tourists, slaughtering shoppers, raping women, persecuting followers of other religions, chucking gays off buildings, etc - which is a very 'nice', liberal way of looking at things but probably a long way away from being anything like the whole story.
Posted by Craig at 13:03