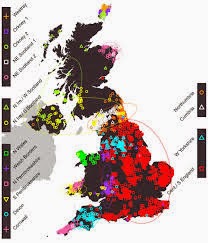 Guardian journalist and BBC presenter Adam Rutherford was back on presenting duties for Radio 4's week science magazine programme BBC Inside Science. He began by reporting on that fascinating study into the genetic history of the British 'Caucasian' population which hit the headlines this week.

It showed, as you are probably aware: (a) that Britons have barely moved from where they has settled in around 600 AD over the course of 1,400 years; (b) that almost all 'Caucasian' Britons have a significant genetic inheritance from the original inhabitants of these isles; (c) that all of these ancient communities can be linked to specific communities in other Western European countries (especially France and Germany); (d) that the Celts are a diverse bunch with less in common with each other than they have with, say, the English; (e) that ancient regional/county dividing lines reflect the DNA evidence (especially the one between Devon and Cornwall); and (f) that the conquerors (the Romans, the Vikings) had very little genetic impact.

All very interesting. I couldn't help getting the feeling, however, that Adam Rutherford was using the study on today's BBC Inside Science to make a point, to get across a particular message - and that he was doing so with all the subtlety of a pumped-up Viking warrior on a big night-out.

Can you spot what message he might have been trying to get across from his introductory and closing remarks?:

But first, the election is looming and one of the perennial topics is immigration.  Well, believe it or not, we're absolutely a nation of immigrants and over the last 10,000 years there has been wave after wave of immigrants coming over here, taking our jobs, breeding with our women.

Great Britain - a nation of marvellous migrant mongrels! - by a long shot my favourite study of the year so far.

And there was far more where that came from.

Some Guardian writers/BBC presenters just can't stop themselves from pushing an agenda it seems, courtesy of the BBC.
Posted by Craig at 20:12