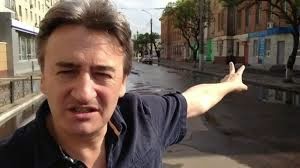 And while I'm 'borrowing' stuff from Alan at Biased BBC, I'd also like to recommend another of his 'spots': a fine, insightful piece from Mark Lawson in the Guardian.


Mark Lawson compares the two News at Tens - the one on BBC One and the other on ITV - and finds that the BBC wasn't the serious, straight, analytic one. The BBC programme was more populist in feel, full of simplistic gimmicks and 'operatic' turns from its star reporters (Fergal Keane and Robert Peston), and contained 'news items' which then turned out to be little more than plugs for upcoming BBC programmes.


I'll quote a different section to Alan, as it struck me as particularly good and introduced me to the splendid term 'fergal keaning':

Thursday night anchors Mark Austin and Mary Nightingale at the ITN desk and Sophie Raworth alone in the BBC studio had the same lead story – the terrorist attack on the museum in Tunis – with identical UK-based spin: the killing in the incident of a British tourist. Each had also got a journalistic big gun there in time to report live: Rageh Omaar for ITV and Fergal Keane for the BBC.

Omaar employed the standard sombre tones and vocabulary of tragedy reporting – “the peace of a Tunisian museum shattered by gunfire” – but his rival showed why the term “fergal keaning” is now used by some to refer to the sound of Irish lamentation. “Today the fearful aftermath,” Keane noted, of “the new age of international terrorism”. He made priests at gravesides sound cheerful in comparison.

ITV used two bits of Omaar to “doughnut”, as the jargon has it, a London-made package about the methods of Islamic State terrorists. The BBC wrapped two chunks of Keane around an interview with a local man who claimed to have known one of the gunmen and observed his turn towards extremism.

As a viewer, I wondered how the crew in Tunis could be completely certain that a stranger found so rapidly and speaking in translation phrases of a generalised kind – the guy used to “drink and gamble” with them before being “radicalised” – really had known the terrorist well. But presumably the BBC’s news managers were happy with the guarantees given.

One presumes indeed.
Posted by Craig at 20:24