Oh Good, Nick Robinson is well enough to blog. Best wishes Nick, and I hope you’re back on our screens soon. Norman Smith  doesn’t ring true. He’s like a man who fears he’s gonna be found out at any moment.

Anyhow, Nick Robinson’s blog is welcome, but it’s also quite troublesome. He writes in simple language and breaks up the text into paragraphs of no more than four lines. It must be aimed at those of us with learning difficulties. He poses some helpful questions to assist us with exercising our voting rights. It is rather like those quizzes that are supposed to determine what sort of person you are, you know, psychological profiling for readers of women’s mags.

Are you Labour or Tory?
Oh dearie me.
1)I have mixed feelings about the EU. 2) I felt hurt and rejected when the SNP was so keen to break away from me, but they’ve been so beastly ever since that now I don’t care. 3)This is not an ‘either or’ question. I’d have to answer that with a fit of coughing. 4a) yes; 4b) yes. 5) I don’t think the country is full but I’d prefer it if it was less full of Muslims. I fear that politicians haven’t got a clue about which immigration the country needs.
There; does that make me an irresponsible voter, or are my learning difficulties too far gone for your quiz?

What does concern me is Theresa May’s baffling approach to Islamism.

On the positive side, the government has noticed there’s a problem.
"Give the authorities the powers to close down ‘extremist’ mosques", Theresa May says.
This is because the horrific antics of IS and the turmoil in the Middle East has caught the attention of our politicians. The trojan horse affair, the ’Asian’ grooming gangs, the Lee Rigby slaughter and various other troubling signs of Islamic discontent seemed to have passed them by until IS started cutting people’s heads off and posting videos of it online. Look at us! they were saying.
Suddenly people started running off to Syria and we didn’t know whether they should be prevented from going, prevented from coming back, or brought back and given an ASBO.

Now, in order to calm us down the government has invented two separate categories.

Category a) Extremism.
Mainly Islamist extremism, but that would be Islamophobic, so this embraces ALL extremism. (Christian, Jewish, far right, and should they become radicalised, the Womens Institute.) I don’t know if the far left falls into the extremist category but I think they forgot it.

“We must always take care to distinguish between Islam – a major world religion followed peacefully by the overwhelming majority of one billion Muslims worldwide – and Islamist extremism. Islam is entirely compatible with British values and our national way of life, while Islamist extremism is not – and we must be uncompromising in our response to it.”

The above is an excerpt from Theresa May’s YouGov speech “A Stronger Britain Built On Our Values”
Oh look. Someone named Dr. Joel Faulkner Rogers, also of YouGov, has pointed out in the Telegraph that the British people ain’t buying it. 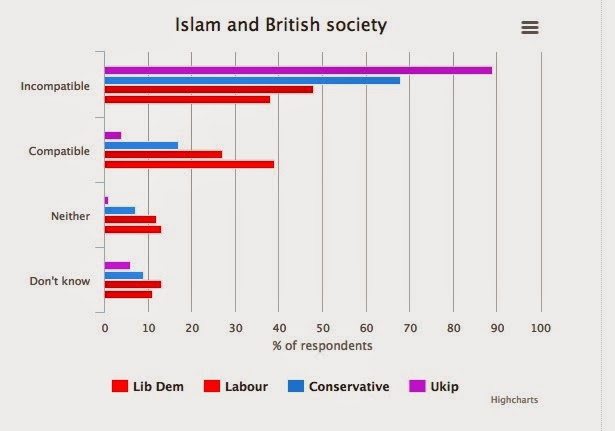 Having said that, Dr. Rogers returns to the YouGov party line.

“These figures hardly reinforce the idea of new partnerships and highlight a deeper problem that is unaddressed by a tub-thumping appeal to values: public concerns about extremism andMuslim concerns about alienation are currently locked in a vicious cycle, feeding each other in ways that fuel the atmosphere for extremists and their increasingly sophisticated portrayals of a war between Islamic and Western societies.
If the answer to extremism is united communities, then the first question is “how do we break this cycle?”.

This is reminiscent of “We must learn to live together.” Why must “we” learn anything? Why must “we” break this cycle?  Answer is we can’t, because it isn’t a cycle. It’s Islam. Islam is incompatible with British values. The only kind of Islam that might be compatible is a drastically reformed Islam, one which ditches 90% of the claptrap that makes it so antithetical to British and or Western values.

Here is what Theresa May went on to say:

“....... extremism is not something that can just be ignored. It cannot be wished away. It must be tackled head on. Because where extremism takes root the consequences are clear. Women’s rights are eroded. There is discrimination on the basis of race and sexuality. There is no longer equal access to the labour market, to the law, or to wider society. Communities become segregated and cut off from one another. Intolerance, hatred and bigotry become normalised. Trust is replaced by fear, reciprocity by envy, and solidarity by division.”

And this is ‘extremism?” No, it’s not. It’s well within standard norms of Islam. At least the standard norms of the kind of Islam that is responsible for Trojan Horse, Asian grooming gangs, Lee Rigby’s murder, etcetera.
They’ve found no evidence of a specific ‘plot’ to radicalise schools?  It might not be a plot. An organised plot isn’t any more necessary than an organised plot to make everyone under the age of 70 get a hideous tattoo.  Peer pressure? fashion victimhood? stupidity? Who knows. They just do it because it’s become their kind of norm. Radicalising schools is their kind of norm. No plot necessary.
Why is it okay for British Muslims with that kind of norm to go about their business with the protection of Theresa May, the police and the BBC?
Three Girls and the Five Girls from Bethnal Green Academy.  Headmaster Mark Keary.

The Daily Mail published video evidence that  the father of one of the girls, Abase Hussen was pretty extreme himself. The police, the headmaster of the Bethnal Green Academy, the BBC and the government have chosen to ignore this. Either that or they genuinely believe that flag-burning and screaming anti-American, anti-democracy slogans is part of normal moderate Muslim behaviour, and nothing to do with influencing any offspring they might have to run off to participate in anti-western Jihad.

The academy, rated as ‘outstanding’ in its 2012 Ofsted review, is currently putting on weekly talks for parents giving advice on the issue.
But parents fear this is merely ‘papering over the cracks’ and have called for a thorough investigation. Parents have also started holding their own meetings to discuss the growing problem of Islamic fundamentalism at the school.

Parents, Ofsted, the headmaster, the police are all baffled. Baffled and mystified I tell you.
I recommend they consult Nick Robinson. He could set it out clearly for them, maybe in the form of a quiz.