The BBC and the housing crisis 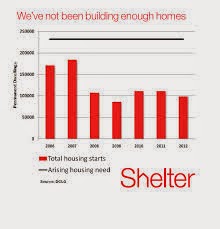 The previous post mentioned that I felt as if the BBC has been campaigning on the issue of affordable housing this week.

Having had a busy few days, I've not seen or heard much of the BBC output and yet - to my astonishment - wherever I've turned I seem to have stumbled on items about the housing crisis and the need for affordable housing.

Is this just coincidence? Is it also a coincidence that the report on 18-24 year olds (described in the previous post) also seemed to be promoting the issue (at the expense of others)? Is the BBC campaigning on the issue?

As far as the latter question is concerned, it certainly seems to be concentrating on this issue in a concerted way.

Countryfile concluded that the government's plans are not going to bring about the necessary amount of new affordable houses that the countryside needs.

Panorama - the most opening campaigning programme of the lot - argued that "we've only ever met demand for homes when government has intervened", that we should urgently build on green belts [everyone agreed on that], that home ownership is "a national obsession", and that "justice" is needed. It ended with the question:

How is it possible for us to real comfortable and secure as a nation when so many of us face insecurity about such a fundamental part of our lives?

All of these programmes share a curious feature - a lack of focus on the causes of the present need for millions more homes in the UK. As a result there was no mention of mass immigration as the likeliest cause, as outlined by groups like MigrationWatch. This is par for the course for the BBC.
Posted by Craig at 20:53