"Anti-Semitism in the UK: Is It Growing?" 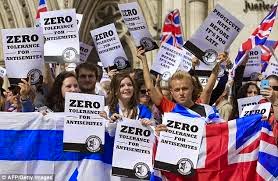 Tonight's The Report on Radio 4 took a scary look at anti-Semitism in the United Kingdom:

Anti-Semitism in the UK: Simon Cox investigates the changing face of prejudice against Jewish people after recent lethal attacks in Paris, Copenhagen and Brussels. With the Israeli Prime Minister, Benjamin Netanyahu, calling for European Jews to move to Israel, we look at whether there is more dangerous anti-Semitism online and on the streets of the UK.

You might have been expecting to hear a lot about the threat from Islamists, but no...

The vast bulk of the programme was devoted to the far-right - from Combat 18 in the '80s and '90s to National Action and Joshua Bonehead in the 21st Century - and the programme did a good job of exposing these scumbags to the public eye (even though the Combat 18 bit seemed somewhat historical).

It certainly didn't hold back from shaming these marginal creeps - even broadcasting some of the disgusting tweets sent to Labour MP Luciana Berger, and quoting some of their odious 'justifications'.

Particularly shocking, however, were the experiences of Conservative MP Lee Scott.

He receives regular anti-Semitic death threats - including ones that target him late at night in parliament after his staff have gone home. He needs a team of around five people to watch out for his safety when he makes certain public appearances. Here in Britain, in 2015.

Mr Scott's experiences came at the central point of the programme, midway through the section devoted to the far-right.

In passing, however, it was mentioned that his abusers call him "an enemy of Islam". Quite who these Islam-defending abusers were wasn't speculated upon (Combat 18 leftovers? National Action? Bonehead? Someone else entirely?), and the focus on the far-right continued for a further nine minutes.

With just five minutes to go, however, the (half-hour-long) programme suddenly changed tack.

An advisor to the police and the government said that anti-Semitism is an "endemic", "deep-rooted", "engrained" problem in the Muslim community...

...at which point the fierce, 'brave' tone of the programme (towards the fringe nutjobs of the far-right) suddenly vanished, and the BBC's habitual, culturally-sensitive apologism took over.

Simon Cox quickly read out some of the excuses. He narrated the point that British Muslims have a harder time of it than British Jews, that they experience more attacks than British Jews [going, as statistical ignoramuses tend to do, for the bare totals and completely failing to relate them to proportions: i.e. to the much smaller proportion of Jews in Britain compared to Muslims], and that they suffer "Islamophobic" attacks on a "daily" basis.

He also said that many might see the advisor's criticisms as "a misleading and inaccurate portrayal of their views". (The advisor, in response, conceded that their are plenty of positive examples of British Muslims behaving in a friendly fashion towards British Jews, but that the problem of Muslim anti-Semitism remains.)

And, having spent a mere three minutes on the dangers posed by Muslim Jew-hatred (despite Paris and Copenhagen - and in contrast to the 16 minutes devoted to the far-right), Simon then moved on, towards his closing remarks...

My closing remarks are this summary (which I emailed to Sue immediately after the programme, but which I know she won't mind me sharing):

'The Report' on Radio 4. It was about anti-Semitism in the UK. Most of it focused on the far-right. About three minutes were given to Muslim anti-Semitism, hedged with lots of caveats and several uses of the word "Islamophobic" - that Muslims are victims of more hate crimes than Jews, that they suffer abuse "daily". The anti-Semitism of the anti-Israel Left wasn't considered at all.

Maybe I should just have left it at that.

Are we really to believe (pace the BBC here) that the main danger to Britain's small Jewish community comes from the rabid, marginal boneheads of the British far-right?

Update 6/3: Not a Sheep's take on this is well worth reading - and accords very closely with my own. His conclusions?:


So there we have it, a half hour BBC programme on the rise of anti-Semitism in the UK that manages just three minutes on the problem of anti-Semitism in the UK's Muslim community and counters that with the BBC presenter casting doubt on the veracity of those claims. Just another typical piece of BBC programming that protects Muslims from criticism even when that criticism is from a British Muslim expert.