A Tale of Two Emilys

Last night's Newsnight had two interviews on the EU referendum - one with Jacques Delors's one-time right-hand-man, former EU trade commissioner and director-general of the World Trade Organisation Pascal Lamy, the other with former foreign secretary and Leave campaigner David Owen.

All very balanced, except for two things:

(1) From the opening credits to the introduction to her interview with M. Lamy, and then again during her interview with Dr. Owen, Emily Maitlis stressed that this was the former director-general of the World Trade Organisation speaking - a man with years of experience in negotiating trade deals, she kept saying. It felt like a classic 'appeal to authority'. Only attentive Newsnight viewers would have spotted the 'former EU trade commissioner' caption popping up during the interview. Less attentive viewers might never have spotted the clue as to why he was so anti-Brexit.

(2) Emily's interviews couldn't have been more different. With Pascal Lamy, it was 'Thoughtful Emily', listening attentively, not interrupting and asking the odd 'helpful' question too. 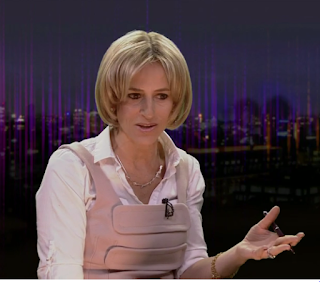 With David Owen, however, it was 'Aggressive Emily', interrupting incessantly, contradicting and barely letting him once finish (or, at times, start) a point. 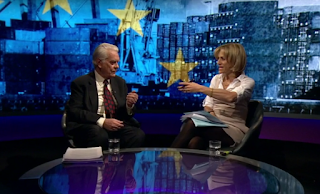 Shouldn't she have given Pascal Lamy a rougher ride and Lord Owen a gentler ride and, thus, achieved something a little closer to the idea of BBC impartiality?
Posted by Craig at 09:14