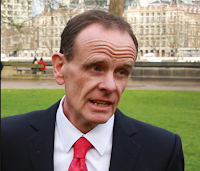 I have to say, I listened to Nick Robinson and Norman Smith's 6.30 am preview of George Osborne's big announcement about the huge economic costs of leaving the EU with growing astonishment.

After a very detailed, uncritical exposition of what the Chancellor would say, Nick and Norman began discussing how effective such big 'killer' arguments (as George Osborne's 'Why would you want to be poorer?' question) can be - as Norman said they were during the Scottish referendum.

And then Norman Smith turned to the Leave side and, putting on a less upbeat tone of voice, gave a very brief summary of what they might say in response.

He then began dismissing one of their arguments as "cobwebby" (i.e. old and musty) and emphasising the "key challenge" they face: of having nothing - nothing! - factual on which to base their arguments, and of, therefore, simply having to "assert" that things will get better if we leave the EU.

Now, if that's an even-handed piece of reporting then I'm a banana.


Nick Robinson: I wasn't paying attention because I was paying attention to what the Chancellor says is going to be the reason we may all have to pay a great deal more if we choose to leave the EU. He's been writing about that in the Times. He'll be talking to us later in the programme. and Norman Smith, our deputy political editor, has been studying it all. We don't yet have this beefy document from the Treasury, do we, Norman? But we do have a sense of the Chancellor's arguments.

Norman Smith: And I think it's meant as the government's big 'killer' argument. Which is, bluntly, this: We will be poorer, permanently, if we leave the European Union. And this is based on an analysis they have done of what would happen to the economy if we had an arrangement like Canada has - which they say is the sort-of mid-range of options between going for a Norway-Switzerland arrangement, where you have complete access but you have to accept free movement, or going for something negotiated through the World Trade Organisation. And they say if we went for a Canada option we would face some tariffs, there would be much less (sic) limited access to services (which make up 80% of the economy, and that access to the Single Market, they say, takes 40% of our exports, it's boosted trade with the EU by something like 75%, boosted trade worldwide by something like 50%. So it would have a massive impact. We as a nation would be permanently worse off and we as individuals will be worse off. Secondly, public services will be hit to the tune of billions of pounds. We will get a figure on that later today. And, lastly, sort-of pre-empting the riposte the Chancellor expects from his opponents, he will urge them not to label this simply as 'scaremongering', to come up with some concrete arguments themselves rather than to simply say 'This is all part of Project Fear'.

Nick Robinson: This is partly what it's about, isn't it? Trying to flush them out, in the way in Scotland there was an attempt by those opposed to independence to say, 'Well, if all our stuff is about fear, you spell out exactly what you would do'?

Norman Smith: I think that's absolutely right. and I think the analogy with Scotland goes further, because in Scotland the key 'killer' argument, I think, was the currency question, 'What will you do without the pound?' and think the key 'killer' argument which the Chancellor is trying to put here is 'Why would you want to be poorer?' Now, the Leave side say, well, actually, modelling it with Canada...They will challenge the details of the modelling...

Nick Robinson: Challenge the assumptions as well that it's based on.

Norman Smith: Indeed, and question the sort of tariff implications which the Treasury's basing its analysis on. It also says the Treasury has a deplorable record when it comes to this sort of analysis, pointing to its support for the euro, its support for the Exchange Rate Mechanism, even going back to the 1971 white paper where they predicted greater growth in the UK from being part of the Common Market. I mean, there's something slightly cobwebby about all those arguments. But I think the key challenge they face is being able to come up with a factual response. And the reason they struggle there is because there's nothing they can look at, there's nothing they can model it on, because no one has done this before. So they are in the realms of asserting that Britain would be more self-confident, we'd be more buccaneering, we'd be more entrepreneurial, we'd be more go-getting. But they have nothing to actually build a factual case.

Incidentally, when Norman talked about the Leave side "challenging the details of the modelling", it's a shame he didn't attempt some of that himself.

His colleagues at Reality Check, in contrast, have "challenged the details of the modelling", saying that the Treasury is using a flawed model, that the Canada option is "by no means the best case scenario" and that the Norway option would be better, and my throwing cold water over the whole thing by saying "all such economic modelling should be taken with a pinch of salt". 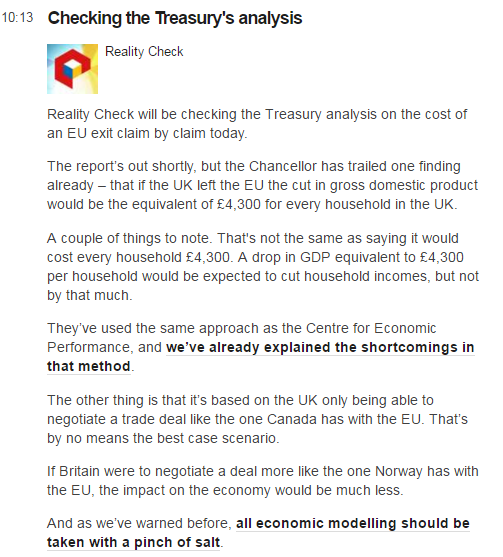 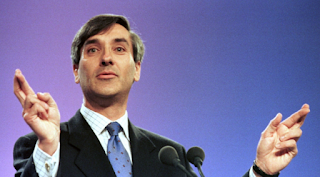 P.S. When John Redwood then appeared at 7.10 and his first answer included the following...

I mean, this is a Treasury which had to make huge changes to its forecasts for the next two years, just between November and March, when it decided its November forecast was completely wrong. This is a Treasury that failed to forecast the huge damaged membership of the Exchange Rate Mechanism inflicted on us. They were always very keen for us to join it and it gave us a huge recession. They failed to forecast the damage to the UK from the Euro crisis of 2011.

...I suspect he was completely unaware that Norman Smith had mocked this line of argument a little over half an hour earlier. Attentive Radio 4 listeners, however, might well have thought less of his "cobwebby" answer on the back of that BBC intervention.
Posted by Craig at 13:00