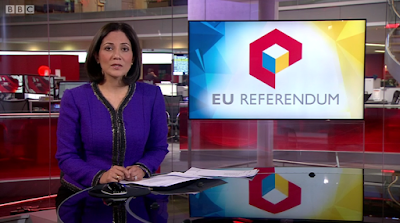 Day Three of ITBB's survey of the main evening news bulletin on BBC One shows that studies like this - of the Cardiff University kind - can throw up all sorts of questions beyond the pure stats.


Take today's stats, from the BBC One News bulletin at 6.30 pm, using the metrics I set up two day ago:

This changes the running total to:

Helpful angles in the opening headlines
For Leave: 0
For Remain: 1


And that's where all the questions set in for this kind of thing.

As ever, there's a transcript of tonight's coverage below. Please give it a read and see if you think it's as pro-Brexit-biased as today's 'Direct Quotes' stats suggest.

I think, in contrast to that suggestion, that the whole thing was biased in favour of Remain - from the choice of its main angle; from the way the introduction gave a clear account of the French minister's anti-Brexits points whilst not spelling out why pro-Brexit supporters had dismissed it; from the brevity of the BBC reporter's presentation of the pro-Brexit point about EU state aid rules (and the fact that she failed to explain what those rules are to News at Six viewers); from the way, instead of spelling that out, that she went straight onto spelling out "one of the biggest challenges for the Out campaign"; and from her following Chris Grayling's contribution (a rebuttal of M. Macron) with a litany of powerful figures saying the UK should stay in the EU.

As ever, please judge for yourselves though... 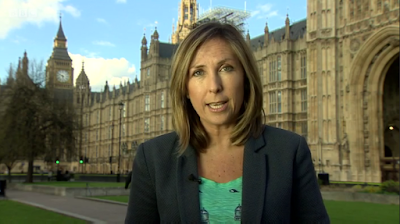 17/4 Newsreader: A French government minister has said that Britain would have a much weaker hand when negotiating trade deals if it voted to leave the European Union in June. Emmanuel Macron said that the UK would find it far harder to defend its steel industry against China. The claims have been dismissed by supporters of a Leave vote. Here's our chief political correspondent Vicky Young.
Vicky Young: Thousands of steel workers at Port Talbot face an uncertain future as the search continues for a buyer. But the problems faced by this industry have become part of the debate about whether the UK should stay in the European Union. China is being partly blamed for the crisis because its cut-price steel has driven down prices. Today the French economy minister said it would be weakened if it left the EU and its 500 million consumers.
Emmanuel Macron: Today you are strong because you are part of the EU. Because when you discuss about your steel industry with China you are credible because you are part of the EU, not because you are just UK. You will be completely killed otherwise. You will never be in the situation to negotiate face-to-face with China because your domestic market is not as relevant.
Vicky Young: Others argue that it's actually EU state aid rules which prevent the government from supporting businesses in crisis, including the steel industry. One of the biggest challenges for Out campaigners is to explain how the UK would buy and sell goods with the EU. French ministers have dismissed the idea there will be a quick trade deal after a vote to leave. Campaigners say that's nonsense.
Chris Grayling: Emmanuel Macron may be the French presidential candidate next. Does anybody really think he's going to say to French farmers, who are a pretty important constituency to him, 'Guys, we're not actually going to be giving you access to British supermarkets in future. It's never going to happen. He's a pragmatic politician who needs to get elected and it is in his interest his producers keep on selling us their milk and their cheese.
Vicky Young: Whether it's a French minister, the head of NATO or the American president later this week, there's no shortage of powerful figures lining up to say the UK should stay in the EU. But they all insist it's simply friendly advice, conscious perhaps that the British people might not like being told what to do by outsiders. Vicky Young, BBC News, Westminster.
Posted by Craig at 21:54