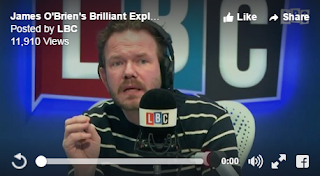 Occasional Newsnight presenter James O'Brien is 'allowed' to have opinions on his LBC show. and he's rarely shy about expressing them - even if they're total tripe.

Here he is on the subject of Ken Livingstone today squarely laying the blame for Ken's political and moral downfall on, yes, supporters of Israel.

These supporters of Israel have "manipulated" Ken, JO'B says.

Poor Ken's had to put up, "daily", with their 'frustrating' 'world view' and his disgust with them finally got the better of him.

Such supporters of Israel share the same 'radicalised' mindset as terrorists, JO'B says. They think "the power and purity of their cause" (support for Israel) means "they are allowed to do absolutely anything" (including 'manipulating' Ken Livingstone it appears).

They defend everything Israel does, including "people sit(ting) on sofas on the Golan Heights to watch the explosions unfold in the Gaza (Strip)..." [any sense of Israel's geography clearly not being among JO'B's strong points].

People like Ken "don't know where to turn" (poor lambs!) because of these unpleasant supporters of Israel, and their "very, very loud" contributions.

For JO'B then, Ken Livingstone is more sinned against than sinning. And it's those supporters of Israel who are the guilty party here.

And thus - with the help of some smears, a few straw men and occasional displays of ignorance - did occasional Newsnight presenter James O'Brien stick up for Ken today.

Lest any 'people like Ken' are reading and think I'm 'manipulating' what James O'Brien said, here it is in full:

Should he be chucked out of the Labour Party? I don't know. I honestly don't know.
What I do know is this: The offence was epic, stone-cold stupid, nasty, ignorant, probably bigoted, possibly racist.
For the record, I don't believe Ken Livingstone is a racist man.

But I do believe he has been, if you like, manipulated. He has allowed himself to be turned into a caricature of his own original position, and I know how that happened.

It's time for some clarity. Let me tell you how it happened.

And the key word here is not 'racism'. The key word is 'radicalisation'.
Let me explain: Someone who has been radicalised believes that the purity and power of their cause, justifies every possible action. Most obviously this would included terrorists and suicide bombers. They are so persuaded of the purity and power of their cause that they believe they are allowed to do absolutely anything.

And you get that on both sides of the Israel-Palestine debate. You get a very, very vocal but not actually violent constituency of people who defend Israel whatever it is they do, and they are radicalised. They're a relatively small minority but they are very, very loud. Just as radicalised people on the other side of the divide are not in the majority but they are very, very loud.
And when the radicalised supporters of Israel turn their fire upon a critic of Israel, the critics of Israel don't know where to turn.
Ken Livingstone doesn't know where to turn.

So where does it leave you? I don't know. You can tell me. Where it leaves Ken Livingstone is in the political wilderness.
Because that frustration he feels, at the radicalised side of this debate, the fact that he will be exposed daily to the world view that says that anything, anything at all, wherever the bombs fall, however the justice is laid out, whether or not people sit on sofas on the Golan Heights to watch the explosions unfold in the Gaza ...it's all justified.
And Ken Livingstone, daily, gets exposed to that world view. And he has allowed his frustration and his disgust at it to completely corrupt his conscience.