Cardinal Nichols on "Mosul and other parts of Syria" 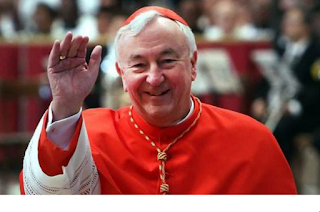 Not really a 'BBC bias' thing this, more a 'Cardinal Nichols' thing...

It's probably from listening to too many editions of Radio 4's Sunday but I've come to have a certain expectation about Vincent Nichols, Archbishop of Westminster - and that's that if a BBC interviewer asks him a straight but tricky question he'll seem not to have heard it and answer something else instead (a process popularly known as 'waffling'). He would make for a great 'machine politician'.

Take his interview with John Humphrys on this morning's Today, in light of Pope Francis's arrival in Lesbos to give "hope" to the "refugees" there.

John Humphrys, having given him quite a lot of scope to make his case for many more refugees to be taken in by the UK, then asked him about economic migrants (not that he used the phrase). "Many" of those trying to get into Europe are economic migrants, he said (not that he used the phrase). 'Should they be treated the same way as those fleeing war?', John asked. The cardinal, as we say up north, appeared to cock a deaf un:


Cardinal Nichols: We are a very rich country and, I think, with a greater cohesiveness between a spirit of willingness that is there among many and mechanisms which governments can put into place. We could be doing more.
John Humphrys: But you will be aware, obviously, of people listening to you now, saying 'It's all very well for him. He's a cardinal. I've got a few kids to bring up. I'm barely managing. Why should we be helping people who could just have stayed at home?'
Cardinal Nichols: Well, I think that the point of that sentence is clearly most of them can't just stay at home, otherwise...
John Humphrys (interrupting): Many could.
Cardinal Nichols: ...otherwise they would. I don't think the struggle of people in the destroyed villages in and around Mosul and other parts of Syria [sic] - some of who we listened to a few minutes ago - ...Those struggles are not the same as our struggles.
John Humphrys: Hmm. But there are many who are coming here because they want a...perfectly understandably...they want a better life.
Cardinal Nichols: And they are willing to make a contribution.
John Humphrys: So we should be more generous towards those people as well - not just those who are driven from their homes by terrible war but by those people who want a better life? We should be more...to those people we should be more generous as well?
Cardinal Nichols: I think, as I say, there are things commendable about the government's approach in taking refugees directly from the refugee camps. There are problems with that, but I understand that because that helps us to monitor and to receive well. That's the programme I'd like to see extended considerably by our government. And we are very generous to people in the refugee camps around the world, but it just needs a more cohesive approach. As I say, we need to see what is there in front of us. These are people. These are engineers who have worked for British companies in the Middle East. They are people like ourselves, and they are desperate. And we should open our hearts as well as our political and financial resources.

John Humphrys didn't push the matter. He changed the subject and pushed something else instead.


These kinds of Today interview - especially if they're conducted by JH - are always the same. The senior Christian or Jewish UK religious leader - or man or woman of faith - is questioned thoughtfully and probed fairly gently on political matters, and JH always seems to be holding himself back, oh-so-thoughtfully...

...unless the issue is something to do with the Churches or synagogues being socially conservative about something or other. Then, suddenly, John Humphrys sharpens up again.

The closing section of this interview was about the Zika virus and the Catholic Church's opposition to contraception. It was as if John H had suddenly woken up and was morally outraged about it.