An alternative take on 'Newsnight' in the Shetlands 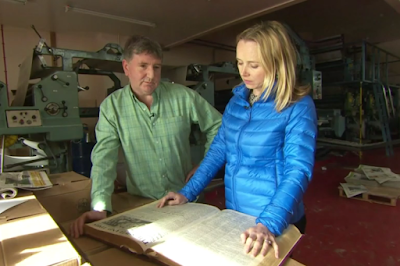 Here's a different take to mine on Katie Razzall's second Referendum Road report on Newsnight, from David Keighley at News-watch:


MORE NEWSNIGHT BIAS: Newsnight continued their series EU Referendum Road on Friday night with a visit by reporter to the Shetland Isles, the UK’s most northerly outpost.  The full transcript is below.  As with her previous report, it heavily favoured the ‘remain’ side – although not so obviously. The ‘in’ case was articulated by two figures: the managing director of a local green energy company, and a woman, who it was said had been passionately ‘out’ at the 1975 EU referendum – to the extent that she had been involved in noisy protests and arrested – but was now firmly ‘in’. Razzall buttressed their pro-EU remarks with an observation at the end that all 15 of the regulars of a local pub were in favour of staying in.  Ranged against that were two ‘out’ figures – one a former ‘Viking chief’ who now ran a local real ale brewery, and who looked to Norway as a model that the Shetlands might follow because the place was ‘absolutely pristine’; and a farmer who said the local economy needed to adopt a more global outlook. He claimed that ‘little Europe’ was ‘not for us’. On the face of it, therefore, there was a form of balance, two ‘ins’ against two definitely ‘outs’.
The bias stemmed from other factors., One was that Razzall said that in the 1975 EU referendum, the islands had been one of only two electoral areas of the UK that had voted ‘out’. She then set out to show that this had been based on that the economy back then had been primarily linked to fishing – and spoke immediately to the green energy manufacturer who said strongly that he supported ‘in’.  She asserted:
‘But how changeable are Shetlanders’ attitudes to the EU four decades on? New industries have grown up since the fishermen swung the vote, Shetland is pioneering tidal power, and Fred Gibson’s firm, which has received some EU funding, is making the fibreglass blades.
FRED GIBSON Shetland Composites The first one is up and running at the moment. As we speak it is actually producing electricity which is going on to the local grid.
KR:        So you will be voting to stay in?
FG:        Oh, absolutely. I think it is going to be very interesting, what’s going to happen here, this time. I can see exactly why they voted no last time. And that was purely down to the fishing industry.
KR:        That’s still important in Shetland, but it employs far fewer people these days.
FG:        When I was at school, there would be at least three or four other pupils in my class whose fathers were going out probably every day to go fishing. It’s funny because I asked that same question to my children quite recently, and they said that they didn’t actually know anyone, and then one of them said, oh, he thought that somebody’s father was a fisherman in his year group. So that has completely changed.’
Thus Razzall’s editing and selection of comment suggested that although the fishing industry remained ‘important’ it was at a far lesser level to the point that fishermen were rare. Checks on Google, however, soon reveal that, in fact, fishing, remains the islands’ main source of income, accounting for 28% of all economic activity. This is what the Shetland Economy website says:
‘The fishing industry – which includes the catching, farming and processing of fish and shellfish – is Shetland’s biggest sector by some way. It has always been at the absolute heart of Shetland’s economy and community. The seafood industry is worth £300m a year to the local economy.’
She deliberately projected a misleading impression to viewers. The reality is that more fish is landed annually in Lerwick than the whole of Wales, England and Northern Ireland combined; the only fishing port bigger than Lerwick in the entire UK is Peterhead; the value of the catch is £76m annually (plus there is a very substantial salmon farming industry); and very substantial numbers of local people are employed in fish processing and related activities.
In ignoring the fishermen, Razzall glossed over a vital strand of local opinion. The local fishermen’s association, as is revealed by their website, is clearly unhappy with the Common Fisheries Policy.
Posted by Craig at 18:23