The Times has a dramatic lead story today. A leaked Home Office report has found that Muslim chaplains appointed by the Ministry of Justice routinely distribute Islamist hate literature in British prisons. 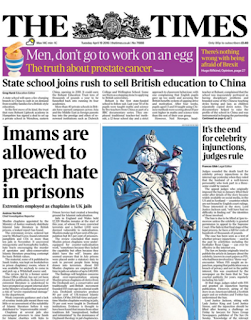 According to Andrew Norfolk, the paper's splendid chief investigative reporter:

The findings will heighten concerns about over-representation among Muslim prison chaplains of clerics from the Deobandi sect, a conservative and traditionally anti-British movement founded 150 years ago in colonial south Asia.

Deobandi seminaries produce 80 per cent of UK-trained Islamic scholars. Of the 200 full-time and part-time Muslim chaplains working in jails, 70 per cent were taught in Deobandi institutions. Evidence is thought to have been found that imams from other traditions felt “marginalised, bullied and intimidated” by the dominance of Deobandi theology in jail chaplaincies.

As often happens with these kinds of exclusives, the Times story spread quickly to the Daily Mail, the Daily Express, the Daily Star, the Sun and the Daily Telegraph (the 'right-wing papers'), and ITV News has been covering it too. The Guardian, the (online) Independent and the Mirror (the 'left-wing papers') don't appear to have followed suit yet though - and neither has the Sky News website.

As for the BBC News website, it hasn't reported the story either (and last night's The Papers on the News Channel missed out the Times completely, even from the programme's opening run-through of the front pages.)

I've not heard Radio 4's Today this morning, but it will be interesting to learn whether they've covered it or not, especially given how serious the story is.


Update: Well, it turns out that Radio 4's Today didn't mention The Times story. There was nothing in the entirety of its three-hour programme, not even a passing mention in any of its three papers reviews.

So: ignored by The Papers on the News Channel last night, ignored by Today this morning and ignored by the BBC News website throughout.

This suggests, doesn't it, that when the BBC chooses to 'ignore' a story it gets well and truly ignored?
Posted by Craig at 09:08