When shall we four (plus Thomas Kielinger) meet again?

This may well be a TL;DR post, but sometimes it's only right to spell things out at length - especially when something is quite so biased a piece of BBC broadcasting as this.

It was a funny old Dateline London today.

Naturally, the main topic of conversation was the coming of President Barack Obama to England's green and pleasant land. And, yes, his Countenance Divine did indeed shine forth upon our clouded hills - and the Dateline panel were almost unanimously agreed on that.

That nice Ned Temko thinks Mr. Obama's intervention will make a difference - especially among "more open" young voters. He found the U.S. president's word to be "good" and slagged off the Brexit camp, calling their reaction "desparate and slightly ugly" and describing Boris as "Donald Trump with a British accent" (which he didn't mean as a compliment!). He further insulted Boris as someone "who won the Nobel Prize for hypocrisy" over his own dealings with the EU (or "Europe", as Ned called it).

There are those that say...Nigel Farage is one...who said the use of the word 'queue' shows that it was already written by Downing Street. He's doing what David Cameron wants him to do...which is as if there's a kind of 'Union of Existing Leaders' and they kind of all work together!....and it's hypocritical because he would never dilute America's sovereignty in this way.

I think we know Gavin's heart wasn't in it from that, don't we? 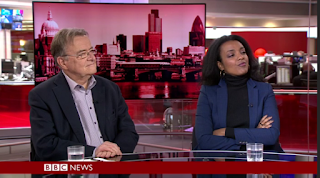 Stryker McGuire, who went on to call it "a friendly intervention", then said "But that's just a pretty foolish thing to say" [i.e. what Nigel said] before 'rubbishing' Nigel's claim. "That I would just dismiss out of hand", he stated.

Gavin then used the b-word (which Iain Watson of the BBC was also using, promiscuously, on this morning's Today - around ten minutes in). He said to Nesrine Malik of the Guardian how stuck "we" all were by how "blunt" he (BO) was. Parts of what Obama said "warmed peoples hearts", Gavin said. Other bits were "hard-headed".

Nesrine of the Guardian called the US presidential intervention "refreshing". It "cut through" all the "hysterical positionings" of our Brexit debate, she said. She called it "helpful advice". She then described the reaction from the Brexit camp as "petty" and "insecure".

Gavin, dismissing "the trivial froth around all this", then played devil's advocate again, paraphrasing the Boris case over the US's reluctance to cede its own sovereignty to a sceptical-looking Nesrine Malik. "What do you make of that argument?" he asked her, before, yet again, revealing his own bias by completely undermining his own devil's advocacy:

We can talk about some of the trivial froth around this but the key point that is being made is - by some, including Boris Johnson - is that he would never do this. That's why Mr. Johnson said it was hypocritical, because the idea of an American diluting American sovereignty in the way in which the British have by being part of the European Union...I mean, what do you make of that argument given there's obviously fairly profound differences between the United States - a continental power 8,000 miles away - and Britain, an offshore island of Europe...I mean there's that difference?

"Absolutely!", responded Nesrine of the Guardian. "And it's insecurity and to even pose that comparison is ridiculous".

Ned chipped in to slag off Dominic Raab as "a discount Boris Johnson" (nice!). 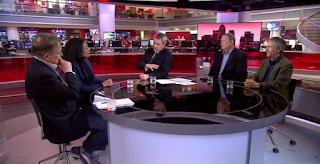 Well, so far, so staggering biased, with the three Dateline guests and the Dateline presenter coalescing on a common, anti-Brexit, pro-Obama position  - and, frankly, Gavin Esler should be ashamed of himself over that!...

And then Thomas Kielinger entered....

From the years (thirty or so now) that I've been listening to Thomas Kielinger on the BBC I know that he's pro-EU and pro-UK (a Europhile and an Anglophile), so it was good to hear him say that. though he wasn't just playing "devil's advocate" (he said - though I don't entirely believe him), there's "something has to be said in favour of these argument swirling around sovereignty"...

At last, an alternative voice (even if he might actually have been playing devil's advocate a bit)!...

Thomas said that President Obama has "enough of an understanding of how much this sovereignty issue worries people in this country" and that the EU "isn't quite the beacon of democracy" that people in America might believe...and, to stony faces opposite, he continued, "Europe has things to answer for for its democracy deficit" and it has "an imperilled future" due to its economic stagnation.

Gavin's conscience was roused: "Those are fair arguments, aren't they?" he asked the rest of the panel.

Ned said yes, but rather than meeting them started insulting "the level of debate" instead before slagging off the Brexit campaign again.

"Exactly", chimed in Nesrine within seconds.

Gavin's conscience was evidently still roused against this threefold 'chicken coup panic' among the rest of the panel against Thomas Kielinger's disruption of their consensus and very weakly put the 'they will still want to buy stuff from us' point.

Stryker ignored it and kept on putting the Obama case: "Basically, you're stronger together". He then slagged off the "nostalgia" and "romanticism" of the Brexit "crowd".

Gavin continued exercising his conscience, arguing (just as weakly) with Stryker that some people ("optimists") are saying things will be better if we leave the EU, "whether you agree with that or not".

Stryker replied that such optimism was a "rhetorical position".

Thomas Kielinger, still having been relatively quiet up to that point, then decided to intervene in earnest, prompting the following expressions from two of the other guests...

The one thing we forget. If it's so dangerous because the Brexiteers can't describe the world outside Europe once it happens, how can Obama predict that Britain will then be at the end of the queue? That is another prediction....That is Project Fear in a sense.

You made the case to be very sceptical about Europe. But why is it then that, in response to Obama, we are hearing things like "He is on the way out so he doesn't count so much", "He's half-Kenyan", "He's hypocritical", "He moved a bust of Winston Churchill because he doesn't regard Britain very well" and "This was a speech written by Number Ten". In other words, the substance that you've addressed is not really the substance we've been hearing in the last...

And, perhaps unsurprisingly, Thomas Kielinger agreed that the responses to the Obama speech have been "quite amazing", "absolutely, horrendously trivial", "piffle", and that Obama is merely expressing an American viewpoint, and that he's entitled to do so, and that "hypocrisy doesn't come into it, goodness me!", and that Europe isn't too weak so you have to get out...

But, decent to the end, he kept trying to offer an alternative viewpoint (even if it wasn't really his real opinion):

But you have to take this situation seriously: that, come what may, once Britain is out there's a new world. Nobody can predict what will happen. Obama says we are linked to the hip, the two countries, 'We are so friendly', so how can you predict that you will be relegating Britain to the end of the queue?

Nesrine ignored this and said that a neutral viewer of the Obama statement would find the Leave campaign's response "reactionary". She then praised Obama's "beautiful metaphors".

Thomas Kielinger wasn't for being silenced and raised a counter-argument (this time very clearly for 'devil's advocate' reasons) about Britain's power in the EU.

Ned stuck up for Obama and his trade deal arguments.

Gavin then put a question to Stryker McGuire, who, Gavin noted, had been critical of Boris Johnson earlier. What was Gavin's question?: Is Boris right to lead the Brexit campaign or should it be someone else whose arguments are "better put"?

Stryker described Boris as "a fluffy magnet for publicity" -  "a bit like Donald Trump", "a figure of fun". 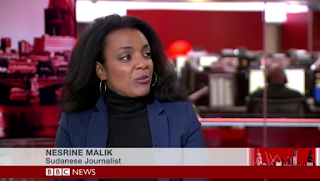 Nesrine said it's been "bad for Boris himself".

If you've borne with me here, you'll have noticed that, without Thomas Kielinger's highly creditable attempts to play devil's advocate, this would have been an out-and-out piece of biased BBC broadcasting.

Gavin Esler, nice as he is, ought to try and learn something from what Herr Kielinger tried to do today. Gavin's own performance (impartiality-wise) was execrable.
Posted by Craig at 20:48