The tomb of Jesus

My holiday reading this year is Simon Sebag Montefiore's mighty tome Jerusalem. So this item from Radio 4's Sunday was right up my street... 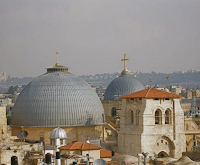 William Crawley: It's been known for many years that the historic site regarded by many as the tomb of Jesus is in serious need of restoration. It lies at the heart of the Church of the Holy Sepulchre in Jerusalem, but renovation work has been delayed for decades because of squabbles between the Catholic, Armenian, Greek Orthodox and other denominations who run the Church of the Holy Sepulchre. Now, finally, an agreement has been reached and next month renovations funded by Jordan's King Abdullah will begin. Professor Martin Biddle is an archaeologist and the author of The Tomb of Christ. Martin, good morning to you. Welcome!

William Crawley: Can you briefly describe in outline for us what this site looks like?

Martin Biddle: Yes, well, you go into the Church of the Holy Sepulchre in the centre of the city of Jerusalem and you turn left and you come into a great, round rotunda. And in the middle of that there is a very extraordinary, elaborate structure, about 20 ft high, about 20 ft long, held together by steel, put on by the British mandatory government in 1947 to prevent it from collapsing. And that is what people believe is the site and contains whatever remains of the tomb of Jesus.

William Crawley: How much disarray is it in? What kind of restoration work is needed?

Martin Biddle: Well, there was a very bad...its history...it's had trouble all over the years. But in 1808 there was a very bad fire in the Church of the Holy Sepulchre, the tomb was clearly, as it was then, badly damaged. It was reconstructed by Greek architects from Istanbul. And that is how we see it today. But in 1927 there was a serious earthquake. The whole of the church was badly damaged, and the tomb was no exception. But it still stood. Eventually in 1947, just before the end of the mandatory government, the British brought great steel bars - from India, of all places....really the end of empire!...and tried to hold the tomb together. And that's how it is today. And it's in trouble. Pieces have been falling off. My wife and I studied it 25 years ago, in great detail, surveyed every single stone, digitally, inside and out, and discussed all the possibilities. And nothing has happened since then. But this is very good news, and very important news, that it is now going to be made safe.

William Crawley: Well, you bring me very neatly to the squabbling, which appears to be the reason why nothing has happened until now. What do we know about the nature of the disagreement?

Martin Biddle: It's that the different communities - which...There are six in the Church of the Holy Sepulchre. We're really talking about the Latins, the Armenians and the Greeks. They have different architectural styles. The Greek Orthodox Church has its own very beautiful, very distinctive style of church. The Latins are the kind of churches we know here in the West. And the Armenians, again, have a very distinctive, personal style...which they feel is very closely - all of these bodies -  related to their own worship and their own beliefs.

William Crawley: This isn't just about interior design? This is about theology, is it?

Martin Biddle: No, well, to a great extent it is about interior design, to be quite honest, in my view. But they want their national styles. They've never been able to agree. When we did our work we were asked to do it by the Roman Catholics. Fearing that there would never be any agreement...and we carried out this very, very detailed survey. We have all the records of it...and we never believed that anything would happen. But, as I understand it, a piece fell off some time ago. The Israeli government, acting as the civil power - which has always had the duty of protecting the communities and the church - said, 'Look, this is a public danger. We can't have this happen.' I believe they closed the church and the tomb for an afternoon. And that was enough warning. And they said 'You've got to do something about this or we will have to take really serious public safety measures'. And that's where we stand now.

William Crawley: And, as if that isn't complicated enough, Martin, apparently, the keys to the church belong to a Muslim family?

Martin Biddle: Well, that's a very old tradition. They have been looked after very, very well for centuries by a Muslim family. I know them well, as one goes in and out, and that seems to work very well indeed. (Indecipherable) worried about the tomb. 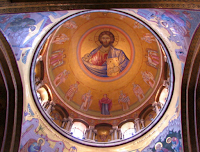 William Crawley: In just half a minute or so...Are we likely to discover anything new about this tomb once it's been renovated and fully opened?

Martin Biddle: Yes. Most certainly so. The questions are: What is left of the actual original rock-cut tomb around which these structures were subsequently built and still stand? What sort of tomb is that? And whose tomb was it? And it was hailed as the tomb of Jesus when it was first found in 325 AD. We don't know why. Is it just because it looked like the kind of tomb one can discern from the Gospels? Or were - and, in my view, this is a possibility - were there graffiti (perhaps scratched inscriptions, perhaps graffiti) on which said 'Christos anesti' ('Christ is Risen') or 'This is the tomb of Christ'.
Posted by Craig at 07:30