Most of the chief T.V. anchors that find themselves hosting discussions on this topic are out of their depth, therefore incapable of getting anywhere near the heart of the matter.
They’re jacks of all trades, and when tackling a specialised and vitally important subject such as antisemitism, distinctly lacking in mastery.
It doesn't help matters that the interviewees on both sides of the divide are mostly plucked from the left, no doubt through left-leaning commissioning editors.

Where are the Muslim voices? What are their opinions on antisemitism? Which BBC anchor-person is putting them under forensic interrogation?  Let’s hear something straight from the horse’s mouth.

Jeremy Corbyn has employed a well-known antisemite, Seumas Milne as a strategist. Where are the penetrating questions about that?

There is one predominant thread that seems to run throughout all the T.V. coverage, be it by interviewer or interviewee, and that is the so-called importance of separating ‘criticism of Israel’ from antisemitism. Some go so far as insisting that ‘anti-Zionism isn’t necessarily antisemitism, and should be assumed ‘not’, unless otherwise stated.

Just before the first question (about antisemitism in the Labour Party) was brought to an unusually premature finish by a nervous Dimbleby, a Q.T. audience member illustrated this kind of thing. Referring to the recent NUS controversy, she put her hand up to say:

“What Israel did.” “What Israel does to the Palestinians”  This sort of expression is all that’s needed to get the ignorant mob clapping and cheering and nodding with moral superiority.

Sky News brought George Galloway in to the studio. The anchor was totally out of his depth, so  not only did he allow a predictable stream of racist venom to penetrate the consciousness  of hundreds of viewers, Sky quite unnecessarily helped revive a waning public profile that should have been left to die a natural death. Who knows, it might revitalise his "0% success rate" campaign for London Mayor.

People have been expressing all manner of racist bile, too. No wonder the unleashing of this monster has raised concerns for Britain’s Jews.  One moment there were sighs of relief that at long last this issue was being openly discussed, next minute there were fears that this was one Pandora of a box that should never have been meddled with. It’s the backlash. Which brings up all sorts of parallels, legitimate and illegitimate. Let’s address the knotty subject of ‘tarring with the same brush’.

We have Sir Philip Green, who has recently come under scrutiny for dumping a massive pension debt onto someone (or group) that lacks the wherewithal to honour it, impliedly following a pattern set by the late Sir Robert Maxwell. 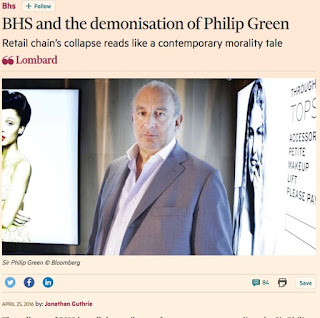 This article entitled “The Demonisation of Philip Green” in the Financial Times (£) says “the demonisation is ugly and disproportionate.” However, many of the btl commenters are not so sure. They don’t like Philip Green, and you can’t help wondering if there is more behind this sentiment than meets the eye.

The OMG Daily Mail has gone to town with a luridly vilifying piece which attacks the  Green family and all who sail in her. Not to mention that yacht. I must say the yacht is a thing to behold. It literally screams vulgarity. “Look at me, I’m the embodiment of greed, bad taste and a massive waste of £100m that could have re- floated the NHS single-handedly.”
Yep. The Greens are not doing the image of British Jewry a lot of good. But, and it’s a big but. Is there truly a comparison with that, and, say,  ‘tarring the whole Muslim community with the evildoings of ISIS?’
You mustn’t tar all Muslims with the same brush, even though “the UK Muslim community” have stated that while they support a whole tranche of anti-democratic, illiberal beliefs, they do not support Islamic State, and some still claim Islamic State is nothing to do with Islam.

The theory that Jews are considerably richer than yow is definitely flawed. It’s a myth.  I have no idea whether or not the bulk of the Jewish community hanker after super-yachts, or whether, given half a chance, they would offload huge debts without a care in the world. Trevor Phillips should organise a poll;  I can only assure you that I, for one do not and would not.  But, there is a palpable tendency to insinuate that the perceived greed of one man and his family exemplifies a racial characteristic. (No-one seems to do the same thing when someone Jewish like Green provides employment by running successful businesses.)

The backlash is as inevitable as the continuing, ever-present antisemitism. Nothing will change unless the BBC and the other mainstream channels address the issues head-on with some balanced and thorough information, concerning both the history and the current situation surrounding the Israeli / Palestinian conflict. Truthful reporting of Arab incitement would be a good start.

As it is, George Galloway and Ken Livingstone are given plenty of space to implant the implausible idea that Hitler collaborated with Zionists and supported Zionism. This is one interpretation of events leading up to WWll adopted by certain Judeophobic writers and authors - some of them Jews  themselves. These writings are popular with a particular kind of audience; reviews and comments related to these publications show which kind of person the notion appeals to.

I expect the BBC will lose interest in this topic (don’t forget John Whittingdale; don’t forget the migrant crisis.) (What? forgotten already?) And I get the sense that it’s already ebbing away, just leaving behind a nasty, scummy stench.

It seems Ken intends to “prove” the accuracy of his  argument because everything he said about Jewish people "was true".

He says Labour should reinstate him.  “I will be presenting the academic book about that to the Labour Party inquiry,” he said.” I understand it’s all there in a book by an American Marxist-Trotskyist writer author named Lenni Brenner.

He may as well quote David Irving to prove something or other about the Holocaust.

“It is inconceivable that Hitler could have wanted to move Jews to Israel, because there was no such place in 1932.Using the word "Israel" when what is meant was "the British mandate of Palestine" has the unfortunate consequence of stripping away the actual historical context and putting the words "Hitler" and "Israel" in the same sentence.Hitler was not a supporter of Zionism.He believed, on the contrary, that Zionism was one of many deliberately deceptive labels that Jews placed upon what he believed to be their endless striving for global power and the extermination of the human species.”

Jeremy Corbyn has no comment when asked what he intends to do about accusations of anti-Semitism in the Labour Party https://t.co/guqNXzPTpt
— Sky News (@SkyNews) 29 April 2016