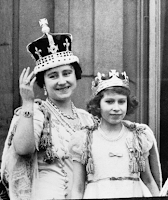 There was an interesting piece from Alan at Biased BBC a couple of days ago concerning an article Anita Anand has written for the BBC News website about the Koh-i-Noor diamond.

In the BBC piece "BBC broadcaster and author" Anita questioned the legality and the "clear immorality" of the UK's possession of the British crown jewel and outlined a black-and-white version of how we came into possession of it that makes us look very bad indeed.

(She's presently working with William Dalrymple, whose history The Last Mughal I can see presently see on a bookshelf in front of me. That was also a bad-and-white exercise in making us look very bad indeed).

Alan spotted - and NewsSniffer confirms the fact - that after article was originally published it was then amended (to correct a date) and that someone added the word 'Viewpoint' to the title of the piece about twenty hours later.

Someone at the BBC must have got cold feet about putting such an article on the BBC as if it were a piece of 'impartial BBC writing', or someone may have complained. (Who knows?)

That was a point made by many commenters at another Anita Anand article on the same subject - this one (you probably won't be surprised to hear) written for the Guardian  - a piece in which, among other things, she describes an article on the theme by historian Andrew Roberts as "drivel".

At least there she provides a bit more context and lays out her own position even more clearly:

If you ask me, we should leave the wretched rock where it is. It is no longer the same stone that was cut from India’s dirt and the claims are too manifold and messy. But don’t pretend the British hold it legally, and don’t be surprised if tourists from India and Pakistan continue to hiss while touring the Tower of London. They are perfectly entitled to do so.

Still, it would be rather rude of them to do so though, wouldn't it?
Posted by Craig at 12:34