John Humphrys: Was Mahomet inspired with a dove?


It must be one of those 'confirmation bias' things....


Some people are in an absolute frenzy about John Humphrys's interview with Sadiq Khan on Today this morning, and some people aren't.

Some people are vociferously complaining about it (hurling around words like "offensive", "bigoted", "partisan", "objectionable", "unpleasant", "rude", "disgraceful", "disgusting", etc), while others are saying absolutely nothing about it.

What happened was that John Humphrys gave Sadiq Khan a strong grilling.

70% of the interview was spent on his personal positions on Islam and extremism; 30% on housing.

It was quite an interview, even though Sadiq Khan dodged his punches. When Sadiq said that London is such a great place because it doesn't just tolerate and respect religious differences it celebrates it, JH remarked 'But Islam doesn't necessarily, does it?'

Letters will be flooding into Feedback, and Twitter is already ablaze.

All the questions are listed below. 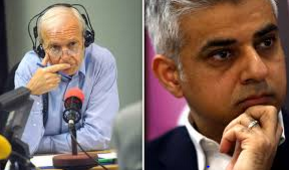